I consider myself a pretty brave dude. I’ve experienced all sorts of physical adversity, emotional doldrums and spiritual crises in my short little life. I’ve confronted nerve-racking challenges, braved strange wildernesses and even, at times, given public speeches in front of tens of people. I am confident I could face Charon and the Styx while showing no signs of fear or apprehension. I stand ready for anything this mortal realm can throw at me, but still two things have plagued my stalwart existence on this blue and green rock, two things that I cannot seem to overcome regardless of exposure or maturity.

Squids should not be allowed. I would be the first in line to vote for a President who had an active anti-squid stance. They are horrible, flowing nightmares made of death and malicious suffering. Their “ink” is actually a demonic ichor, capable of rendering a man insane with one squirt. Their soulless, doll-like eyes pierce the thin veil of reality and offer a glimpse into the horrible void that is their watery home. They have no remorse and will eat you and your children (present and future) given the opportunity. We are just fortunate that they prefer the icy abyss, and rarely test our warm beach shores. Everyone thinks that sharks are the real threat in the ocean, but that is only because they have never experienced the horror a multi-tentacle squid-hug. I haven’t either, but the mental scenario I have created is truly awful.

My fear of squids started out as a fear of anything underwater; fish, seaweed, semi-buoyant driftwood, pool cleaning robots, etc. This quickly evolved into a fear of all sea-faring invertebrates, and I remember being quite afraid of sea cucumbers at an early age. While I still find sea worms and other squishy things to be a tad unsettling, they do not invoke my primal fear quite like the image of a squid does. I also seem to have no problem with Octopi, and find them quite fascinating/cute in the right context. Even squids that are dead or drawn in an adorable manner cause uneasiness in my mind.

I cannot decide if my adult fascination with H.P. Lovecraft exacerbated or surpressed my fear. His focus on ancient, evil cephalopods piqued my interest, and made me feel I was not alone in fear of the unknown deep. Lovecraft’s obsession/loathing encompassed the entire ocean, not just squids, so it is impossible to say how he truly felt about them. I’m pretty sure he hated them though.

People (namely Tiffany) like to tease me about this silly fear. Anything even remotely squid-esque will cause me to shift in my seat nervously. Some have even gone out of their way to send me links to stories of giant squids; links that contain pictures. Pictures of GIANT versions of my fear, with insinuations that they can get much, much bigger, or that the pictured specimen is just a baby. If there are squids the size of office buildings somewhere down there, I am never letting water touch my body again.

The irony is that I quite like fried calamari. I guess pieces of a squid don’t bother me, but things (and the latent suggestions about what really exists in the ocean) like the following make me want to run shrieking into the night: 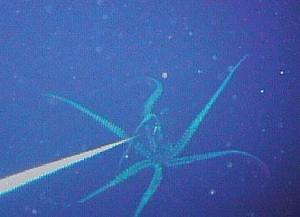 If there is anything more alien and terrifying than a multi-armed, swimming murder machine, it has to be a circus clown. I am not talking about the intentionally demonized clowns that are the focus of things like “IT” or “Killer Klowns from Outer Space“, but the ordinary, disturbingly exuberant kind one might find at a county fair.

The people who voluntarily dress and act as clowns are the scariest by far. They wear far too much makeup, dance without music and often do and say things that are unnecessarily happy. I am a very energetic, generally optimistic person, but I have never in my entire life considered being or dressing as a clown. It is not normal, and people dressed as clowns should be tested for brain damage.

I have no problem with people being lively and fun, in fact I encourage such behavior on a daily basis. Taking life too seriously is a major issue in the paths I walk, and I am often the first to make light of an overly dramatized situation or inject some silliness into the otherwise cold and corporate. But I do not wear a wig when I do this. I do not wear over sized shoes, nor suspenders. I do not laugh maniacally over nothing, at all times. You can be a clown, without actually being a clown. I wish someone would resurrect The Ringling Brothers, Barnum AND Bailey to tell them this. Not that they were responsible for the origin of clowns, but they definitely had a hand in making them “popular”.

I was always confused by the popularity of clowns. Why have they not faded into historical obscurity by this point? Most other things from the 1900s seem horribly antiquated at this point, but somehow clowns, much unchanged from their original concept, still exist. We live in a world of computers and smart phones, but some guy squirting water out of a fake flower on his lapel still passes as entertainment? Clowns are the lowest possible form of comedian (even below mimes), to the point that they should not be alive anymore. I’m not saying we kill all the clowns, but we should definitely kill the idea of a clown. And if some clowns get killed in the process, so be it. The only clowns that may be ignored are French clowns, as they have a legitimate excuse for being clowns: they are French.

And why kill off clowns? Because they are by their very nature terrifying. Children recoil in disgust and horror when a surreal representation of a person on too much cocaine sticks a balloon in their face. Adults avoid eye contact with these people who have obviously regressed to the point that they think riding a very small bicycle passes as a career. Even other clowns are probably disgusted with clowns. I don’t know, I’m not a clown.

No one can tell me otherwise, this is a universal fear that only some of us have actually come to terms with. Look at the following picture, and tell me why this should be allowed to roam free (and make money?) with the rest of us:

The only thing that could possibly be more scary is some sort of squid-clown hybrid. I started to do a Google image search for “squid clown hybrid”, but then stopped after deciding I would like to sleep tonight.