I’m really surprised my house isn’t haunted. Given its long, strange history of additions and owners (from bootleggers to drunken USPS employees) you’d think there would be spirits banging down the door to haunt this place. If I were a ghost (which I’m not, I don’t think) I’d want to live here.

The first part of my house was built in the 1920s, during the prohibition. It was nothing more than a shack in the woods, or so the stories go. Over the years, sections were added, things we modernized…kind of. The house now possesses a certain odd charm. Nothing is a standard length, and many things are hilariously crooked or woefully under-engineered.

While this is great for quirky aesthetics, it makes for troublesome habitation. Almost all of the things I’ve had to do around the house have been custom, working around the random widths of openings and ever-changing dimensions of hastily hung drywall.

In our closet, there is an elongated space that is 17″ wide, 45″ deep, and 88″ tall. Right now in this spot, a pile of pillows and winter comforters are stacked to the ceiling, but this isn’t a very economical use of the space. Tiff and I shopped for a closet organizer, only to find all of the standard sized ones are at minimum, 18″.

So, being the kind of guy I am, I suggested I could build one. Out of PVC pipe.

I mean, why not? It’s easier to work with than wood, you can use tons of joints to stabilize the thing, and it’s super lightweight. I know this sounds like a high school science project, but no shit, it worked out pretty well.

-1″ PVC pipe (you’ll need as many inches as you need. I ended up needed just over 50ft. I know, crazy.)
-Various PVC joints (I used 2 elbows, 4 tri-elbows, and 12 “T”s)
-PVC joint compound (use in a ventilated area, unless you want to get really high)
-A hacksaw (other saws may work, but a hacksaw is the easiest/cheapest)
-Enough casters to support your contraption (if you want it to be able to roll)
-A tape measure (do I really need to add a comment about this?)
-A Sharpie® (black works best, but use green or blue if you’re feeling festive)
-Beer (I found Noble Pils! Holy shit!)

Noble Pils and CPVC compound; a match made in heaven

This is pretty easy. Figure out what dimensions you need for your space and mark the PVC piping accordingly. If you’re planning to split the pipe multiple times for joints, etc., make sure you compensate for the length of the joints themselves. They tend to be 1″ to 1.5″ additional in your overall measurement.

When you’ve got your measurements marked out, go to town with your hacksaw. It takes a little bit to get going, but if you’re reckless (read: drunk) you can cut through this stuff in 4 of 5 heavy-handed strokes. Don’t worry if the cut isn’t perfectly straight; it’ll be hidden by the joint anyway. 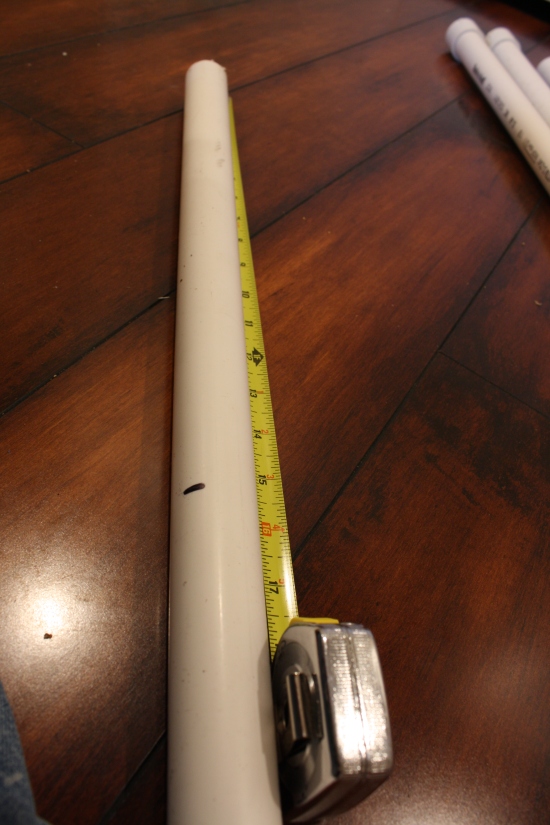 Inches and stuff, yo.

Step 2: Shove rod A into slot B

As I write this, I wonder if I really need to write it. These pieces fit together like LEGO.

Once you’ve gotten the pieces cut, shove them into the correct holes to make the parts you need. Start with the base. I made both end supports first, so that I could work upward from a (somewhat) solid base.

Step 3: Continue to hack and shove until you’ve created a rectangular base

You want your base to fit the width and depth dimensions of your space. If your space is narrow but deep (like mine) you should probably add supports to the middle of the base, to make sure it doesn’t buckle under the weight of your awesome clothes. I have several sweet-ass jackets that could surely destroy a lesser closet organizer.

As mentioned before, the joints are a tad longer than the pipe, so be sure to compensate for the new spacing when cutting the pipes to length. Protip: Don’t guess. Use the measuring tape. It will save you a ton of time and probably money.

So, this is pretty cool.

Step 4: Test fit the base/bask in your glory and drink beer

Before you go much further, make sure the base you’ve made fits the spot you’re trying to put it in.

If it doesn’t, go back to Step 2 and cut to length.

If it does, drink beer and brag about how awesome you are.

The base is cool, but the whole point of this thing is to organize the closet. As such, you need to be able to hang things like dresses and pin-striped suits and Renaissance Faire outfits. Cut the PVC to a length your wife can reach, otherwise this project is moot.

Oh yea, you should probably add your casters now. Just super glue them to the bottom of the “tri-elbows.” 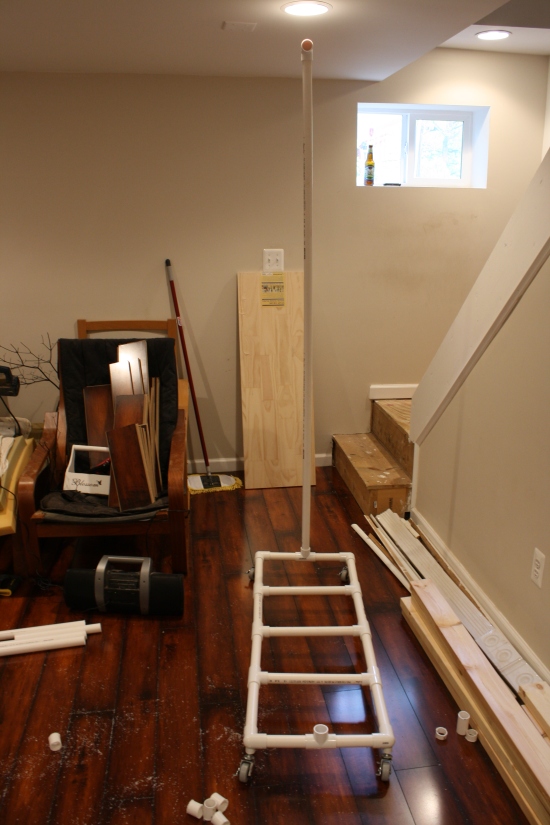 Step 6: Drive back to Lowes 3 different times to get the stuff you forgot

By now, you surely realize that you’re short on piping, casters, glue, joints, and beer. Drive back to Lowes to get whatever is missing. Go to the liquor store to get more beer.

Now, cut the rest of the pieces to length and stick them together. If your organizer has been built correctly, it should stand quite well on it’s own without human (or house elf) support. 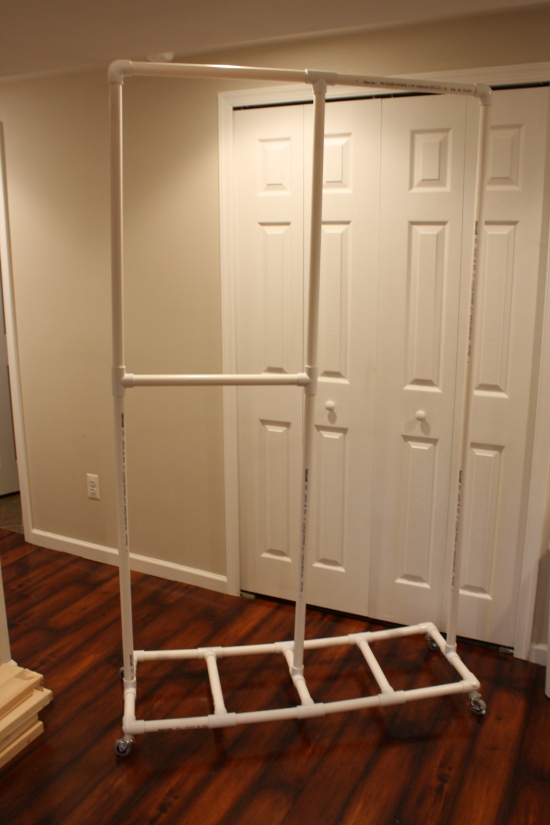 I know it LOOKS like it is sagging in the middle. That’s because it is. I ended up adding 2 more casters, but I was too lazy to take pictures of it.