Not all of these posts are going to include Lego. Just most of them. Maybe I’ll do some in Minecraft to mix it up a little.

This post piggybacks off of my previous post about characterization, but is more focused on complete drafts.

As one of my enthusiastic classmates was waxing poetic about her experience revising her latest fiction piece, it struck me that the entire Draft Development Cycle (DDC) builds on itself. You’ve got all of the details, characters, and settings in your head, but they are raw, disorganized.

There is some strong magic swirling around the craft of writing that hides the creative process. Unlike master painters whose every brush stroke can be witnessed and studied, excellent writers seem pull their stories and skill out of the ether, as if it is an extension of their very soul. Young writers often don’t see the missing piece; the years and years of practice and patience and persistence.

This leads to disillusionment.

Like when you imagine an amazing picture of a bear riding a snowmobile firing laser blasters at robot dinosaurs, expecting it to look like this:

Why yes, I did Photoshop this myself. Thanks!

But when you finally draw it, it looks like this: 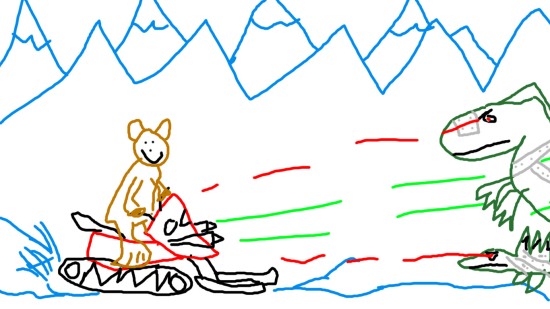 Yep, drew this myself.

As is the case with any creative art, it takes time to refine your skill and eventually master it.

As a writer, you have a singular advantage over painters and sculptures and sidewalk chalk drawers: your art is infinitely malleable. First draft sucks? No worries! Just rewrite the parts that suck until they unsuck. You can never make a mistake that can’t be rectified.

Drafting is like playing with Lego. You start with a blank, flat green board, have all the pieces you could ever need in a big plastic bin next to you, and can build anything you want. For this example, let’s say you want to build a picturesque castle. You imagine the castle in your head, and get to building.

This is the very first draft of your piece that comes oozing out of the primordial goo that is your psyche, malformed, unsure that is should even exist. I call it the “zero” draft instead of the “first” draft, because chances are your main theme is underdeveloped or completely missing at this point. This is the draft where you let your brain shift the gears while you carelessly slam your foot down on the accelerator. As to be expected, you might crash and burn and suffer horrible injuries, or at least swerve wildly around the roadway, endangering everyone and everything around you.

The zero draft of your Lego castle would look something like this:

They told me I was daft to build a castle on the swamp, but I build it all the same.

It’s not not a castle, but it’s certainly not something you’d like to defend during a siege. But you’ve got a start, the bones, the basic structure of the castle, even if it’s little more than a pile of rocks with a flag at this point.

After you’ve taken some time to evaluate the structural integrity of your castle, you can rewrite your zero draft and fix a lot of the problems. You can add content, remove stupid fluff, flesh out characterization, and really right the ship. Don’t go too crazy with fixing grammatical stuff at this point; you’re more concerned that the mortar of the castle will hold, than what color heraldry you’re going to put into the great feast hall.

The first draft of your Lego castle could look something like this: 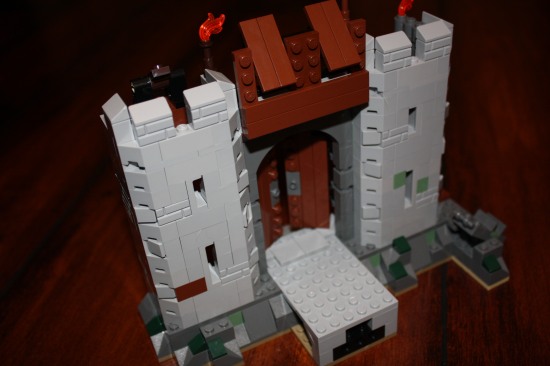 This is what I imagine the front gates of Riverrun looks like. But you know, with more walls.

It’s a lot more castle-esque now. There is still a gaping hole in the back of the structure, and your guards would demand hazard pay to walk along those ramparts. But at least a drunken peasant could identify it as a castle now, which is a step in the right direction.

The next draft is actually a series of drafts, in which you tweak your content, have other people read it, question character motives, and ask probing plot questions. This is when you build a tall tower for your gaoler, only to tear it down when you realize you don’t even have a dungeon. This is when you fill in the murder holes you added just behind portcullis because your kingdom isn’t, and will never be, at war. This is when you learn about your story, and can play with character desires, tweak dialogue, and repair any of those major plot holes that have been sucking the narrative into a mire of confusion and triteness.

The Draft X castle could look something like this:

What manner of man are you that can build a castle without rock or wood?

That is no Orc horn!

Now you have a castle to write home about. Unless the castle is your home. Then your letter won’t go anywhere. You can see that the walls are strong, and you’ve even made room for windows and arrow slits. The roof has taken shape, and you have staircases connecting the scenes for your characters to walk up and down.

It is important that even though your castle looks pretty good, you don’t stop. Stopping now would be like running a 100-yard dash and stopping at 95 yards. It’d be like baking a delicious cherry pie for 45 minutes when the recipe called for 60. It’d be like dressing yourself in the morning but intentionally not putting on pants. Don’t stop yet, you’re not done, but you’re almost done.

Getting here takes time and effort, so if you’ve made it: woot to you!

Now is when you get to really dissect the language of your story, correcting unintentional passive constructs, replacing boring verbs with explosive ones. This is also the time to adds bells and whistles; flesh out characters and setting descriptions, re-pace your action scenes, and de-mushify the romance.

Eyes to text as comb to hair.

This is what your final draft would look like, if it were a castle:

The horn of Helm Hammerhand shall sound in the deep one, last, time!

Now you can pitch it or post it or sell it or just bask in the glow of your hard, tedious work.

Just remember: a castle (much like Rome) isn’t built in a day. Even the best architect needs to plan out how he uses his materials, which stone goes where, and how many beams are needed to support the weight of the roof. If your piece isn’t what you expected it to be, draft and draft again. The bin with the all the Legos is right next to you.