We’ve had a heart-to-heart about characterization. We’ve talked birds-and-bees about the ins and outs of drafting. We’ve danced, and laughed, and had one too many beers.

In concept, dialogue should be easy. You’re making your characters talk. To each other. Or themselves. We, as humans, talk to each other all day everyday. How hard is it take what is a perfunctory exchange and put it down on paper?

(My theme accidentally shrank my pictures. I’m working to fix the CSS. In the mean time, feel free to click the images for full sized, readable versions.)

Think about how you speak for a second. Even if you are the most intelligent and articulate sum’bitch in your postal code, you’re bound to drops some “ums” and “likes” and awkward pauses into your daily speech. These do not translate well onto the page, and make your writing seem crude and unpolished. This in turn “breaks the dream” for your readers, and makes them lose interest.

So you need to make your characters hyper-articulate to keep readers interested. Every sentence they utter should be intentional, clear, and character defining. I’ve even heard (and like the idea) that the very first thing your character says in your story is a snapshot of their personality.

Doesn’t seem so easy now, does it?

It may be tempting, as you build a world or place a story in a certain locale, to give your characters some regional spice by giving them clever accents. Unless you know that specific dialect perfectly (as in, you grew up immersed up to your neck in people speaking that way) avoid doing this.

It is incredibly difficult, and more often than not confused/distracts/offends your reader. See below: 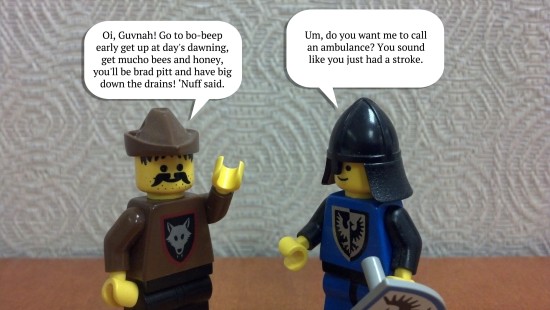 A ‘lil cockney rhymin’ slang ain’t nevah ‘urt no one, no hows.

What we often forget as we craft our worlds is that our readers are smart. They can fill in blanks we leave behind, and will, if we let them. If your reader knows the story is set in an English-speaking suburb of Medieval France, you can bet your pants that they’ll automagically give the characters French accents, just because that’s how the human brain works with patterns.

If your setting is ambiguous (or nonexistent in real life, like in high fantasy or science fiction) then you can qualify the dialogue very early on by adding a tag like, “Anytime, mon cheri!” said Julius, his creole-like accent spilling through his clumsy pronunciation.

But seriously. Only do this is you have balls of titanium alloy and a pen made out of powerful ancient writing dust.

I’m very guilty of doing this; making characters say things to let the reader know a key detail, when the character already knows this detail and would never say it out loud.

It’s like a very heavy-handed soliloquy that just doesn’t work. These tend to slide themselves in during scene climaxes and endings, where you’re trying to reveal a universal truth or some story defining idea that your protagonist learned during their journey. 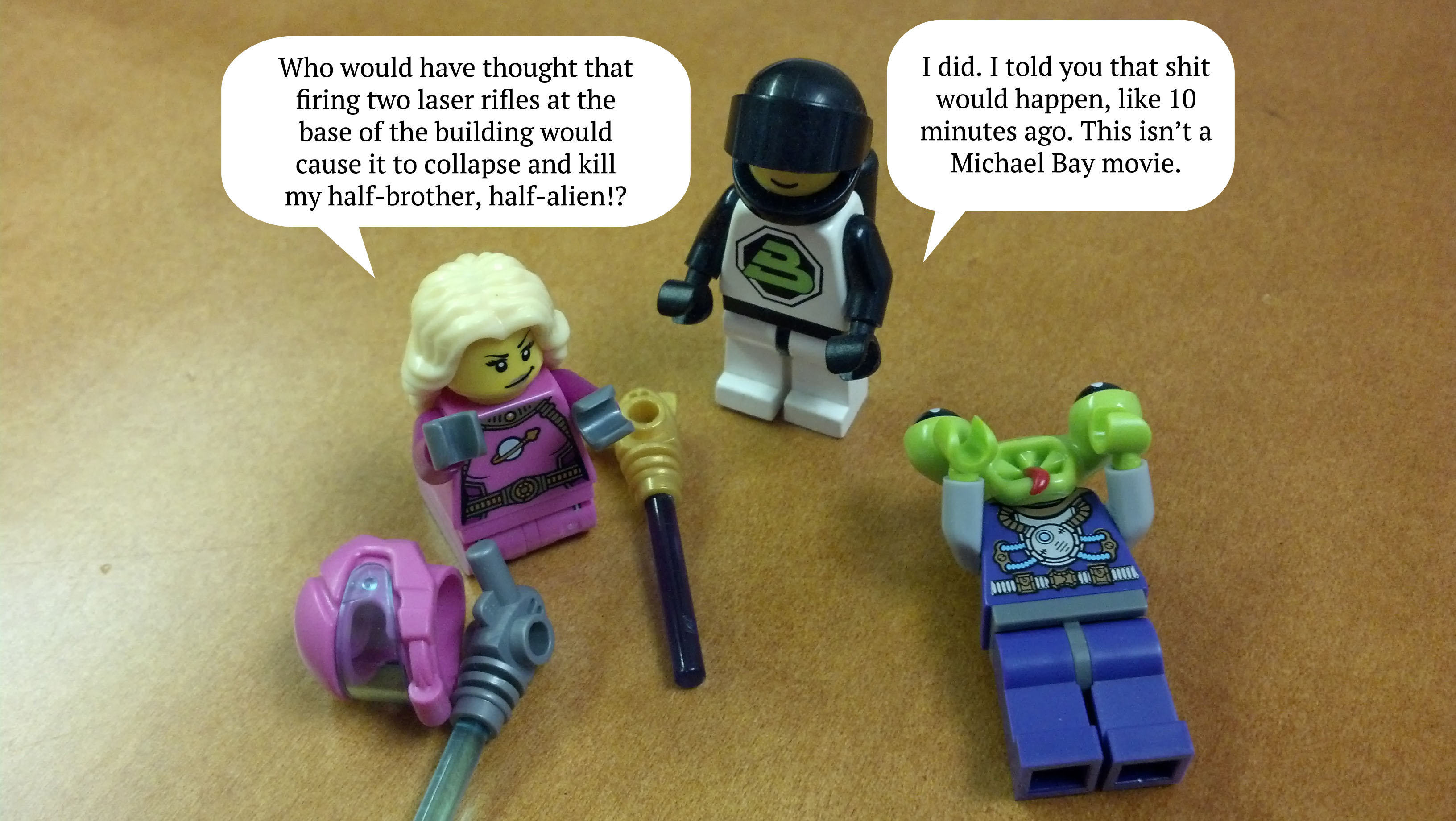 Needs significantly more explosions to live up to Mr. Bay.

In this case, pink Space-Lady wouldn’t need to say this out loud (to herself or anyone else) because she would have already drawn that conclusion in her head. It is your job as a writer to figure out how to make this message come through in the extra-dialogue writing, be it exposition or plot action.

You can try to have a symbolic event that passes this message along, or have your character find and read a note, giving us an omniscient view into her thoughts and in turn making the announcement seem less “here’s my awesome story defining idea let me shove it down your throat with some lemon juice and calamari.” There possibilities are near endless, but avoid a “Deus Ex Machina” moment by giving your reader a trite, obvious statement directly from a character.

(My “note” suggestion is highly dependent on the Point of View (POV) you’re working from, but that’s juicy writing-meat for another educational cookout.)

In a short story, it isn’t that hard to give a character a voice and have it carry over 3,000, 5,000, or even 10,000 words. You definitely have to pay attention, but since your narrative arc is relatively small, you only need to keep a voice consistent for a short period of time.

When you try to keep a voice consistent in a novel, things get all maple syrup really quickly. As the plot quickens and thickens and character motivations change, it becomes increasingly difficult to keep their voice inline with their established personality, but also situation appropriate. Even the most bubbly cheerleader is going to slightly change her tone when the werewolf lumberjacks and clawing at her door, but you, as the master of the universe, need to make sure she still sounds like the same cheerleader.

This get stupid-complicated when you bring in three, four, five, or ten characters in the course of a story. One out of place piece of dialogue that contradicts the characters established personality and motives can change (read: ruin) that character’s impact on the story:

The Uruk’hai are misunderstood creatures.

The easiest way to keep track of each character’s voice is to simply draw a picture. Or make an Excel speadsheet if you’re as nerdy as I am. Write down the “default” voice for each character, and then compare that voice to each scene.

He’s the same character, but his voice changes appropriately per the scene he is in. I highly recommend visual aids to help organize your characters and scene, especially if your story is so complex it would make weaker men wet their brain-pants.

Dialogue fills two main roles in fiction: it gives your characters directly attributable voices and it speeds up narrative. Conversely, exposition can give insight into characters, but it also slows down the pace of the narrative.

While it seems logical to have your characters speak whenever they need to say something, counter intuitively, this may not be the best idea. If you’ve got a scene that is very, very dialogue heavy (say, 100% dialogue) your reader is going to blow through it very quickly. If you place that scene at a crucial point in the story, you may inadvertently cheapen what was supposed to be a poignant and heartfelt.

Ever notice that “Godot” has “God” in it? Whoa.

Balancing dialogue and exposition also keeps the reader interested as you’re weaving action, backstory, setting details, and unique voices into the writing all at the same time.

Try reading your story out loud. Are there places where you seem to warp through a section at lightspeed, skipping the Romulan fleet altogether and putting the entire Federation at risk? Do you find yourself switching between two characters so frequently that you can’t remember who is what or when or where?

You might find that you can break up your dialogue with some action and it will still be just as effective. Jumble the pieces if you have to. You can always Ctrl+Z.

Neither of these are so important to warrant their own section, but while I’m rambling, I figured I’d mention them. 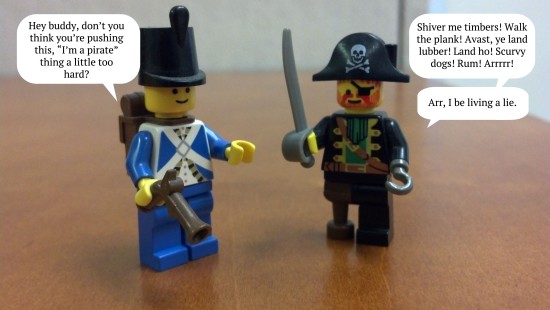 Captain Rumbeard had always wanted to be a Belgian chocolatier, but his father would have never allowed it.

Avoid making your characters say thing that you hear other people say often, like “he’s a thorn in my side.” Instead say, “he’s jabbing at my innards with his pointy stick of annoyance.” Pass your draft to someone else and tell them to circle anything that seems familiar. Chances are, most of what they circle will be accidental cliches.

Be sure to also properly tag your dialogue. In my first novel (attempt) I used them very sparingly, and at some points, not at all. My beta readers were very confused. Drop little phrase like “said Stevie Mufflington” if it is unclear who is speaking, or if no character clearly identifies the other. You almost never need to use anything more than the past tense of say (said), but very judicious use of stronger words like “exclaimed” or “barfed” can work, if they’re not overused.

My last note is to openly talk to your characters. You know deep down what good dialogue sounds like; you’ve already read it and seen it on the screen. You may want to do this behind closed doors. Starbucks patrons don’t take kindly to you have a two-way conversation with completely imaginary people (who just so happen to be giant lizards who work on an oil rig).

Speak up. Write down.