I remember the exact moment I found the decaying remains of some old abandoned rail road tracks in the woods of Gaithersburg, Maryland. It was a monumental event for me; a 13 year old luckily finding a physical remnant of the past buried so carefully by time that it could only be found by literally tripping over it. That day in the woods near Hanson and Sons farm and those rusted pieces of twisted metal may have been the very thing that spurred my obsession with things forgotten.

At the end of my street are some not-abandoned railroad tracks. A nightly symphony of trains accompanies our homework/TV/veg-out time as loud horns and whistles punctuate the still night air like verbal exclamation points. When we first moved in I was concerned about the noise. But now that I’ve lived there for a few years the parade of trains is soothing, almost peaceful, as they saunter on to destinations unknown.

The tracks are littered with detritus from passersby; school children cut across the tracks to reach the nearby middle school and local hoodlums smoke pot and drink malt liquor in the darkness of the nearby thickets. But the tracks themselves are shiny and well kept; freshly placed gravel carpets the area between the ties, making it feel like a weird, skinny white-sand beach in the middle of the woods.

But it’s not the tracks that intrigue me; they’re clearly still in use, maintained, lovingly polished by a mysterious man in a conductor’s hat while the rest of the world is sleeping. The ties are new(ish), the signs are modern fiberglass and metal things; painted with distances and other cryptic railroadology signs that a layman like me does not understand.

Nestled on a small hill, in the middle of several nasty-looking brambles is a sign post much older and more interesting than the others. It it falling over, only held in place by the wild overgrowth that creep up its sides. It looks like it belongs to a railroad that existed in this same spot seventy five years ago. 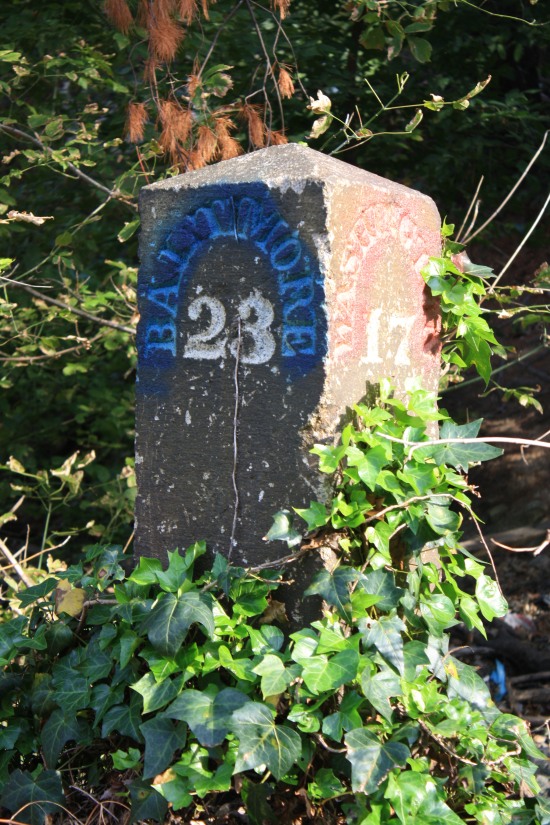 One side says, “Baltimore 23” and the other says, “Washington 17.” I too, concluded the obvious, that this was an old mile marker. But upon Google-mapping, I found that this marker is not 23 miles from Baltimore, nor 17 miles from Washington. It’s almost as if it was picked up and moved here, either by a human’s will or by the slow ebbing flow of nature, growth, and dirt.

It’s also facing the wrong directions to be an effective marker. The “Baltimore” side is facing Baltimore (as the train conductor would see that he is now 23 miles from Baltimore, while heading in the direction of DC) and the same goes for the Washington side. Someone (in their surpassing wisdom) spray painted “Baltimore” blue and “Washington” red, in an attempt to, I assume, make the city names more visible. I don’t think it could possibly help much, as this small stone pillar is crooked, backwards, and probably completely unreadable at 65-75 MPH.

But whatever it was meant to be, someone has forgotten about it. It’s not longer needed as several bigger, easier to read signs have been erected on steel poles on either side of the track, transforming this once obelisk of guidance into an obelisk of obsolescence.

I tried to stand it up straight, but this sucker is heavy, and I was secretly paranoid that a massive CSX leviathan would come roaring down the tracks as I stood messing with a rock, leaving me to leap out of the way or lose my leg, all Fried Green Tomatoes style.

So instead, I lay down on the tracks for a second, ear to the rail, listening for the ghosts of the trains that used this marker rumbling miles and memories away. 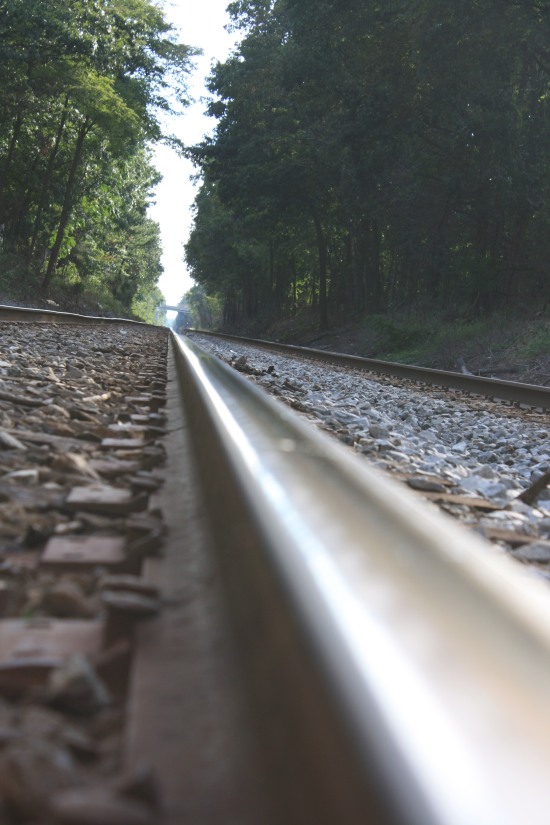