My family has owned property in Chincoteague, Virginia, since 1990. It was our go-to summer vacation spot; a quiet and quaint little beach town with pristine white sand beaches and ponies clopping around like they were human.

I fell in love with the Eastern Shore a long time ago. The setting sun striking the water and reeds at just the right angle produces blues and yellows and greens that I’ve yet to see anywhere else in the world. There is a peace to being in a small town on the water, as if I have stepped back into a simpler, safer, less complicated time.

My parents chose to retire in Chincoteague. This turns all of our family gatherings into compulsory beach trips. A tragedy, I assure you.

The trip from Washington DC to Chincoteauge is a straight-forward, 3.5 hour affair, with little to see except the flat sprawling farmlands that hug Route 50 and Route 13. The occasional farmer’s market or antique store breaks up the monotony of corn and juvenile potatoes. It’s an easy, relaxing drive that usually helps soften and melt the stress of hectic DC life.

Just before the island, there is a 10 mile stretch that passes through the unassuming town of New Church, VA. It boasts a population of 205, dozens of annex offices for corporations supporting the nearby Wallops Island NASA base, and the ruins of a yellow and red building that dominates the major curve on the road through town. 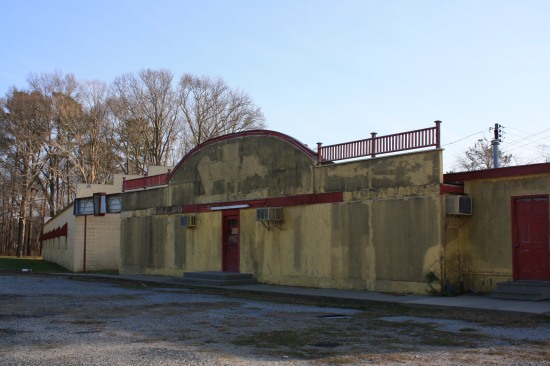 This was someone’s dream, once.

I can remember when this wasn’t the shell of a venue, but a fully operational roller rink. If the parking lot on a Friday night was any example of the success of the business, The Dream Roller Rink was thriving in the mid-nineties. It often had signs promoting “all-skate nights” and food specials. Given the lack of not-beach-related activities in Chincoteague, I can imagine this roller rink was a great place for kids to spend evenings while on vacation.

Just behind the decaying rink, a short road leads to another yellow and red building in an even worse state of disrepair.

I’ve never actually been to a drive-in theater, which seems a shame.

This matching ruin was once a matching drive-in theater, owned by the same family. Both were built in 1940 by Elijah Justice who wanted to offer some entertainment for the local population and the sailors from the nearby Chincoteague Naval Air Station. The station closed in 1959 and the Justice family fought for decades to keep both the rink and drive-in financially soluble despite a dwindling pool of patrons.

Through the 70’s and 80’s the drive-in showed exclusively pornographic movies, which seems really bizarre for an open-air, drive in theater. Despite these attempts to bring in revenue through any means possible, the theater officially stopped its projectors in 1988. The screen, stained and drooping, hung on until 1998.

The only signs that this was ever a drive-in are the decaying brick concession stand and dozens of speaker poles, which have all been dug up and de-speakered.

No parking, even if you could.

The rink stayed open for two more decades, finally shutting down in 2008. A local developer, Don Brown, bought the rink and drive-in, hoping to restore both to bring an Art Deco renaissance back for the seasonal visitors to enjoy. Unfortunately, his vision was never achieved due to a land dispute with a neighbor and some poorly drawn property lines.

In the five years since it closed, The Dream has suffered the ravages of coastal storms, acrid salt air, and petty vandalism. The lipstick red has faded to cracking pink, and the mustard yellow has washed out to pale daisy. A relatively clean spot marks where the illuminated sign used to sit above the main entrance. It is a haunting reminder of a different time, socially and economically.

I couldn’t find what happened to the rest of the Justice family, but I assume they’ve long since abandoned their dreams of The Dream.

Roller Rink – Before and After: 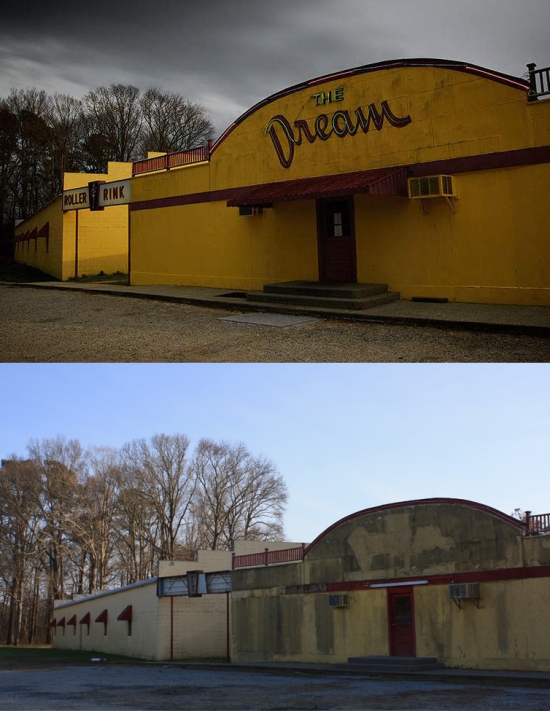 Drive-In – Before and After:

Another interesting note: Writer Paul Hendrickson wrote an article about The Dream for the Washington Post on June 24, 1988, the same year the drive-in portion closed down.