The third match-up in round 1 has the far-Northern German Jever Pilsener trading blows with Washington state’s Redhook Pilsner. 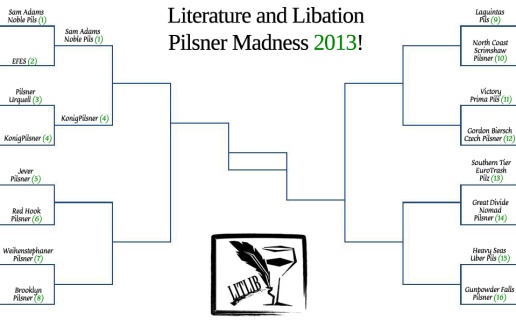 Jever Pilsner (5) – Oddly, Jever (Friesisches Brauhaus zu Jever) was founded by a guy with the same last name as our previous winner: Diedrich König. This particular König started his brewery in 1848 (10 years before his…cousin?) and was a man-about-town, helping do awesome things like install the city’s first water supply system (presumably to brew better beer).

Apparently the König family really loved lager. This is a relatively hoppy offering that comes from the very far northern town of Jever, Germany. It is no frills and not fancy, but is crisp and almost perfectly balanced.

Redhook Pilsner (6) – Redhook was originally known for its ales (and it is officially called the Redhook Ale Brewery), so a lager – especially a pilsner – was quite a departure from their comfortable norm. Anyone who has had their ESB will understand why they chose a pilsner though; Redhook is clean and fresh like the forests it calls home in Woodville, Washington (the same hometown of Carl “Apollo Creed” Weathers).

Redhook stuck their toe into the shallow end of the pilsner pool in 2010 with their summer seasonal “Rope Swing Pilsner.” The water must have been warm enough for them, as they added the pilsner to the list of full year-round offerings (next to one of my favorite, Longhammer IPA). My research didn’t yield whether this is the same recipe, or a slightly altered version. Saaz hops and sweet grains, either way. 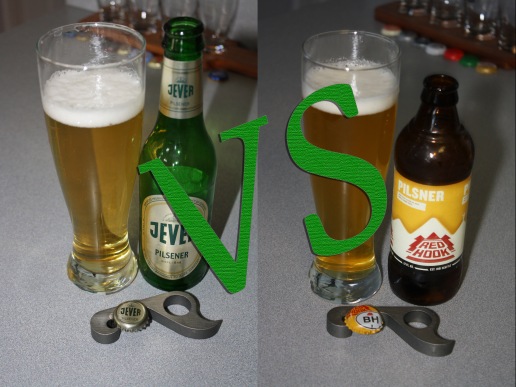 Redhook’s uniform is like nothing we’ve seen before. Points to them for being different, but this is a tournament of beer, not bottles. Pretty even playing field here: Jever has experience and practice on its side while Redhook has youthful energy and ambition. Redhook pours with a little more vigor and color, but Jever has a much nicer, slightly hoppy aroma that escapes as soon as you uncap.

Redhook is putting a lot of pressure on the veteran German, but he’s handling the defense deftly. Both beers can finish nicely, but Redhook’s defense looks a little weak. Jever comes up with big points after Redhook gets a red card for too much carbonation on the field. While the young brew put up a good fight, he ultimately couldn’t keep up with 165 years of tradition and mastery. Maybe next season. Jever 2, Redhook 1.

Jever Pilsner moves on to the quarters!