Southern Tier EuroTrash Pilz (13) – Southern Tier, an eponymous nod to the southern most counties in New York, was started using the equipment from the (sadly now defunct) Old Saddleback Brewing Co. in Pittsfield, Massachusetts. Non-East Coasters might know ST for their more novelty beers, like the excellent fall seasonal Pumking or the desert-like “Blackwater” series that includes Chokolat Stout, Creme Brulee Stout, and Plum Noir Imperial Porter. Their primary line-up is nothing to shake a proverbial dead workhorse at, made up of a nicely balanced IPA (comparable to Brooklyn IPA or Harpoon IPA) and my personal favorite, 422 Wheat Ale.

As I was searching high and low for Pilsners, my wife spotted this one, tucked away as a single near the back of the seasonal shelf at Total Wine in Laurel, MD. It’s labeling makes it look sort of like an edgy unicorn who spells his name with a totally hip “z” who was playing chess fell into the label printer, but it’s appropriately refreshing garb for this crisp pilsner.

Great Divide Nomad Pilser (14) – Great Divide is particularly decorated, having won twelve Great American Beer Festival awards and four World Beer Cup awards. Their original mission was to brew “strong” beer, both in ABV and flavor. To that end, they’ve succeeded, powerfully. I’ve only had two of their other beers – Titan IPA and the Bronco’s Pride, Denver Pale Ale – but they are undeniably, unquestionably, unforgivingly, bold.

Nomad Pilsner was the last beer I found for the tournament, but certainly not the least. The mission for strong beer carried over into the body of this malt-strong and abundantly hopped pilsner. Lagered for five weeks, it has the weight of an ale, but the tickling effervescence and refreshment of a Rhineland lager. 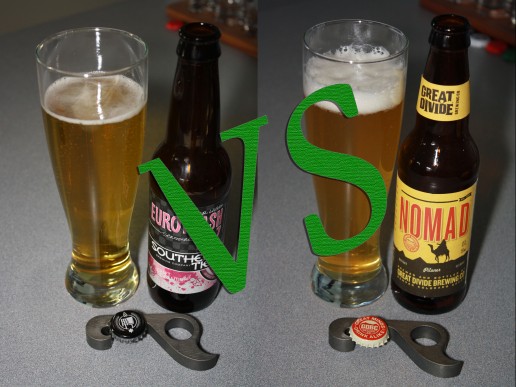 We’ve got two completely different beers clinking glasses here. The EuroTrash is so light, its bubbles whispering through my tongue to my brain, telling me to go outside and drink this while playing mandolin in the Spring sun. The Nomad is the opposite, its heavy malten-spine and powerful upfront, slightly alcoholic flavor demands I sit down on the couch, put on a bad SciFi movie and just chill the eff out.

The head on the EuroTrash froths enthusiastically during the pour, but settles to just a few puddles of bubbles within minutes. The Nomad retains a meaty, creamy pure-white head until the beer is about halfway gone. Both smell delightfully hoppy; notes of citrus and grass waft from the tops of the thin glasses.

The EuroTrash is clean, but unembroidered. It makes no pretenses about who it is, or why it’s here. It wants to be consumed, probably in large amounts, probably to stymie relentless summer heat. The Nomad is full of pretenses. It’s a pilsner that seems to want to be an ale, that wants to echo its IPA and PA and Stout brethren. It don’t take no guff about being a “light” beer.

While I really appreciate the simplicity of the SouthernTier offering, I have to give this one to Great Divide. This is the first pilser I’ve had that had the audacity to try and keep up with the regime established by the ales, and I think it did a mighty fine job. It’s not quite on the level of Victory Prima or Sam Adams Noble, but it’s damn close. 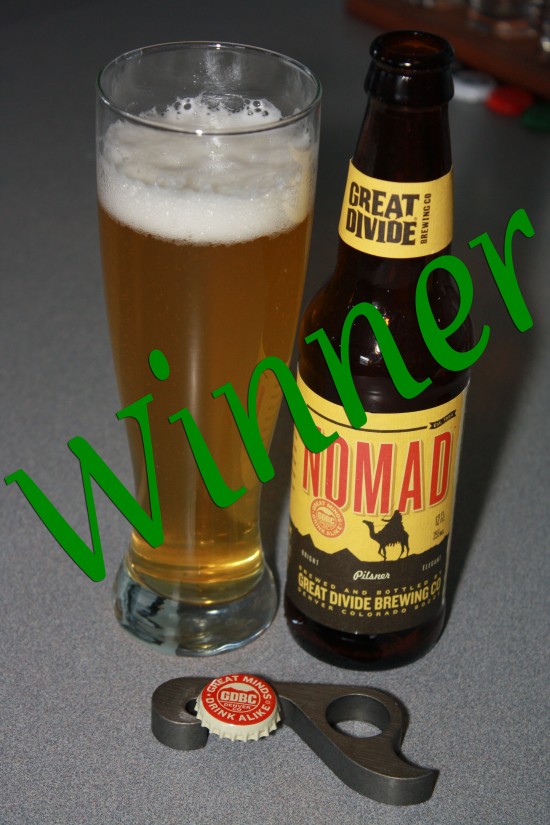