I don’t normally write about pop-culture or TV or movies, and that’s mainly because I’m terrible at following trends. But Game of Thrones (or more accurately A Song of Ice and Fire) tickles my love for medieval fantasy, warfare, swords, and magic in all the right spots. I read the books in a post-injury literary-fever several years ago, and George R. R. Martin’s Westeros lore has been a stowaway on the ship of my brain ever since.

Spoiler Alert: The below has some spoilers, but it’s not exactly running for mayor of Spoilertown. If you haven’t read through at least A Storm of Swords or seen last Sunday’s episode of the HBO show, go read/watch, then come back. I don’t want to be that guy.

I think everyone who flipped/is flipping out about The Red Wedding missed the point. Yes, it was shocking. Yes, favorite characters died in horrible, sort of disgusting ways. Yes, it was all very unfair and how dare a major TV network and a famous author do this to poor, unsuspecting viewers. All that.

But why did we all react so viscerally? Why did a single scene – a minute or two out of an entire season – cause a social media explosion and such anguished outcry from fans?

Because we’ve been trained to expect immortality in our protagonists.

Think about it. Aragorn, Gimli, and Legolas kill what, nine thousand orcs each? And hardly even get a scratch? Aragorn falls off a massive cliff and then basically leads the battle of Helms Deep about 8 hours later. I don’t even think he took a nap in between. The trio fight in some of the largest, deadliest conflicts of the entire series where countless non-character humans and orcs and horses and trolls die, waltzing around all invincible, like they’ve been dipped in the River Styx. Frodo has a few too many dates with blades and giant spider stingers, but ultimately, we know he’s not going to die when things are at their most dire, because he’s still got a ring to destroy.

It’s not just a fantasy trope either. Luke and Han stroll casually through volley after volley of woefully badly stormtrooper aim, countless red-shirts are sacrificed to the Shatnerian gods so that Kirk and Spock can escaped uninjured, and James Bond always manages to roll free from that meticulously designed death-trap just before the laser burns off his crotch. Writers use this near-death tension to further the plot, and our mind fills in the details of the story, letting us pretend the hero is in life threatening peril, even when we know it’s just a surface level conflict. But we know, from all our collective viewing and reading experience, that the hero will get out of the perilous situation, somehow emerge from the underworld, unscathed.

We’ve been taught that if our heroes die, the story will die. It’s hardwired into our brains that we need the protagonists to live. When such an inborn rule is violated, and violated so dramatically, we react badly, because it shakes out entire view of the world.

Traditionally, death in literature is a major plot mover. Major characters are killed with significant purpose, to show the pain of true personal sacrifice or to provide a martyr for other characters to avenge. The placement of death is crucial to the narrative structure, either serving as the vehicle for the story (like The Lovely Bones) or a major turning point/start of a final quest for the protagonist (Obi-wan’s death/Dumbledore’s death). Authors traditionally respect the power of death, the weight and solemnity and gravity it brings to the page.

But not George R. R. Martin. He writes with a bladed pen, killing who you least expect, when you least expect it. His deaths are random, senseless, and often don’t support any blatantly obvious plot point. They are brutal and cruel and make you question everything you know about how stories are told. He doesn’t kill the people who seem to deserve death, and has no problem killing characters his readers are rooting for.

Martin understands non-romanticized death. Understands that death has no morality, no ethical base. It doesn’t choose to kill bad people because they are bad, and spare good people because they are good. Death is the natural end of life, the unplanned yang to our daily yin, and as a result, completely random. How many great people have died young from cancer or car accidents or at the hands of some psychopath with a gun, while evil, cruel people lurch around the Earth until they are old, causing pain and suffering for years and years?

The Red Wedding wasn’t written to simply to shock readers, and HBO didn’t make it so horrendously violent just because they’re into that kind of gore. It was done to support an existential theme, to show what life is like during wartime in a country where even a king, his mother, and his retinue aren’t safe. It was done to show that the main GoT characters are all still human, and can die just as easily and pointlessly as anyone else. Martin slams tradition in the face with a warhammer, forcing the speed and finality of death onto readers without any pomp or flashy shows of mourning. His scenes are so painful because they’re so real.

And that’s why everyone lost their collective shit when Robb hugged some crossbow bolts and Catelyn sang the Rains of Castamere with throat-blood accompaniment. Because the scene was so unsentimental, so honest. Because, extrapolated, it reminds us that all the money and fame and power in the world can’t save you from the grave. Because it was a perfect microcosm of what life – and death – really are.

Remember what Valar Morghulis translates to: 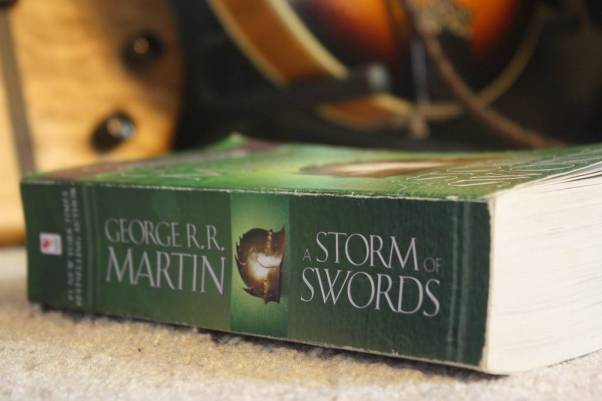 Posted In: Other, Writing
Tagged: a song of ice and fire, death, death in literature, essay, game of thrones, george rr martin, hbo, literary critique, literature, martin, red wedding, robb stark, stark, the red wedding, Valar Morghulis, winter is coming but it doesn't matter because everyone will already be dead