In a post a few months back, I made mention of a “brewbie” (brew + newbie); that person new to the craft beer scene, overflowing with enthusiasm like a roughly poured pint. They are usually young, energetic, and raw, leaping on new beers and beer news like a kitten on a stinkbug. They mean well, but have a ways to go from “that person who knows about beer” to “a full-keg of beer expertise.”

I have a confession to make: I am a brewbie.

Sure, I know some things about beer. I’ve put my big white ale pails and heavy-ass glass carboys to near-constant use, dog eared and highlighted many books from Brewers Publications, delved as deep into the mines of malts and hops and yeasts as I’ve been able to in the time between writing, video games, and that place I’m forced to go to 8 plus hours a day. But I can’t deny my relative lack of experience, can’t deny that there are people out in this community who have been tasting, brewing, and studying beer for longer than I’ve been alive.

This has become more and more apparent as I’ve waded knee-deep into the ocean of beer-related media, started to really interact with the swimmers near me. I’ve noticed others who are much farther out in the water. Some are surfing. Others are playing waterpolo way past the breakers like it’s no big deal. Some even have boats! It suddenly makes my progress, which I was so proud of, seem significantly less impressive. Looking down at the water swirling around my calves, holding up my shorts as to not get the fringes wet, I feel like a failure.

But then I turn back and see that there are still hundreds of thousands of people sitting on the beach. They haven’t even got the energy or desire to stick a toe in the water, never mind wade out to where the other brewbies and I are figuring out how to swim.

So I say to anyone else in my position: it’s OK to be a brewbie. At least you’re out there trying.

We live in a world where social posturing and image crafting are not only accepted, but often encouraged. Because there are few ways to validate the claims people make on social media, we suddenly find ourselves surrounded by self-proclaimed experts who have done purportedly amazing things, who in turn, by comparison, make us feel bad that we haven’t done amazing things. One only needs to look at the “job titles” of a whole slathering of 20-something administrative-types on LinkedIn to understand what I’m talking about. Assistant Contract Proposal Coordinators with one year of experience, I’m looking at you.

As a result of this creeping feeling of inadequacy, a direct side-effect of having infinite information freely available a few clicks away, we try to puff ourselves up in terms of knowledge and perceived worth. We don’t want to suffer the embarrassment of not knowing, even if it would be perfectly acceptable, given our age and experience and education, to legitimately not know. I’ve been guilty of this too many times; hastily, awkwardly Googling answers to not appear dense or way behind the ever upwardly bending curve of knowledge. It’s a crappy feeling to be on the outside of a group you really want to be apart of. But it’s also a reality of trying to learn something new.

Despite the traditional model, learning isn’t a linear journey from A to B where you digest a predetermined set of data points like some kind of academic PacMan. We can try to quantify beer expertise with BJCP and Cicerone certs, but even well developed standards can’t capture everything. When your brain is spilling with beer facts, historical anecdotes, quotes from master brewers, you’ll still have so much more to learn. The end point is constantly moving, hurtling away from you at a speed that you can’t possibly match like a comet through space too distant to ever colonize with your brain settlers.

Good news though! Chasing that comet is the what keeps you growing.

The masters of the craft – the Jim Kochs, the Sam Calagiones, the Ken Grossmans – even with their encyclopedic knowledge and decades of hands-on experience, still have a little brewbie dwelling inside them, an echo of their 20-something self still urging them to try new things, to sip new beers, to write down those OGs and FGs in a never-ending quest for brewing consistency. They are experts by all definable measure, but that je ne sais quoi inside them still drives them forward. They got to where they are as the paragons of brewing because they were at one point total brewbies: guys with an unquenchable thirst to make an impact on American beer.

So accept that you’ll always be learning, about beer and about life and about how beer goes with life. Accept that even if you do eventually stumble backwards into the comfortable armchair of expertise, you still won’t know absolutely everything, because some tricky maltster will come up with a brand new magical malt roasting technique the second you think you do. Accept that you’ll learn your own things, at your own pace, which may not match the pace of others.

And before you know it, you’ll be debating if that piney aroma is simcoe or chinook, or if you are getting hints of vanilla behind the delicious burn of bourbon barrels. You’ll be explaining the difference between lengths of sugar chains and mash temperatures, the curse of Dimethyl Sulfide in homebrew, which yeast strains are your favorite and why. You’ll find yourself giving advice, helping newcomers out, passing your knowledge to that person who is a mirror of who you were just a short time ago.

The more you know, the more you realize what you don’t know. In some way or another, you and I will always be brewbies. But that’s OK, because so will everyone else. 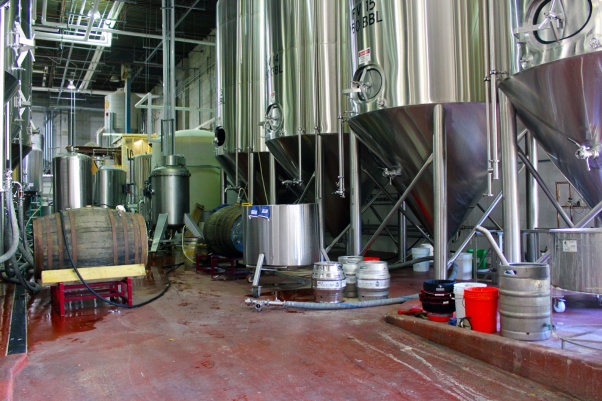 Do you remember the giddy pleasure the first time you saw a row of these?