During a recent visit to the Heavy Seas Brewery, Tristan Gilbert, their master-at-arms multimedia specialist, introduced me to the idea of “billboarding” when describing their new line of canned beers. He explained that while canning provides some practical advantages over bottling (portability, cost), it also gives the beer another spot on the shelves (usually in a different part of the store), and in effect, doubles the chance of being seen by a prospective buyer.

It’s an obvious principle, but one that probably hides in the dark corners of the subconscious, not totally recognized until someone explicitly points it out. It explains why you can get Miller Lite as 6, 12, or 24 bottles, or 12, 18, or 30 cans. It’s why you have massive obelisks of macro taking up enough floor space to make the ancient Egyptians envy the design. All those options mean more packages to display, meaning a larger presence in the store, and in theory, more sales.

Armed with that knowledge and encouraged by Stan Heironymous’s post about craft beer at Walmart, I went on an after-work sociology adventure to see how different stores display their beer, if the layout and presentation seems to make much difference to the buyers, or if it’s just a bunch of marketing nonsense.

I live in Maryland; home of confusingly draconian alcohol laws. My Walmart doesn’t sell beer, and only certain grocery stores that have been grandfathered into old laws can sell beer and wine. Liquor is relegated to smaller independent stores, for reasons I have divine from reading the hop leaves. I chose three stores to form a basis of comparison (a grocery store, a beer-specific store, and a local liquor shop), asked the owner/manager how and why the beer was organized, and then asked some random people buying beer if the layout had any impact on their final decision.

I used to frequent this Shopper’s Food (owned by parent company SuperValu) in my undergrad days because it was cheap. Short of the Beer Barn on University Boulevard (literally a giant red barn full of beer) it was the best place to score affordable 30-packs of crappy beer of questionable freshness.

They’ve since upgraded, now housing a rather impressive selection of craft in the flat light of the massive linoleum covered sprawl. The beer and wine section is tucked in the very back of the store – the farthest possible distance from the front door – which either means something or doesn’t mean anything, depending on how philosophical you want to get about a place that voluntarily calls itself a “food warehouse.”

I am the watcher of the walls (of beer).

I analyzed this wall-o-suds for a while, but couldn’t find any rhyme or reason to how the beers were displayed. It seemed like someone just randomly threw them up there, hoping the beer would gain sentience and sort itself out in the middle of the night.

The manager I spoke to said that the distributors often arrange their products themselves, but noted that some of their staff will often rearrange the displays to fill gaps. She admitted that while she didn’t make the ultimate decisions, she was pretty sure there was “no real plan” and that they just put the beer where the price label said it should be.

The craft and psuedo-craft were all sort of dumped in the same place with no clear distinction. A nearby beer-buyer said that he “wished it was at least alphabetical” and it took him a while to find the six pack he wanted on one of the top shelves. Clearly, whoever organized this didn’t think much about the status of the beers in terms of craft, sort-of-craft, totally-not-craft, and not-even-beer. 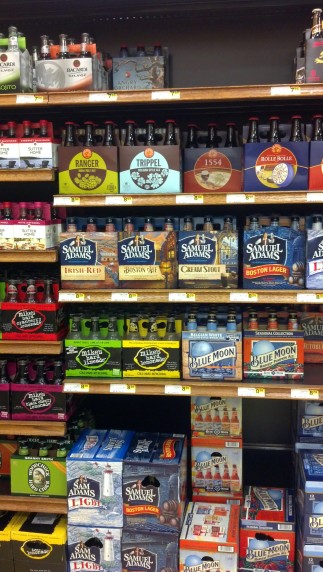 Note the Sutter Home singles next to the New Belgium Ranger.

I think this picture sums up how this big-box store feels about organizing its beer:

I love this place not only because it’s the only craft-focused bottle-shop on my way home from work, but also because it lives in the skeleton of an old Circuit City. The rum is where the DVDs and CDs used to line the walls. The checkout lanes are in the same spot I used to play with car stereos. Old Line is a drunken phoenix rising from the ashes of some overpriced electronics and it’s totally awesome.

Unlike Shopper’s, this store has a focus on craft beer. The main aisle down the center of the store includes seasonal fare (currently the menagerie of pumpkin monstrosities), 4 shelves of 22oz bombers, and then craft beer by state (with MD beer having the primest of locations). The very little macro stuff to be found is on a few sad wire shelves near the back of the store.

The beer guys here clearly draw lines between craft and craftsqueraders like Blue Moon and Shock Top. The entire main row of beers (and the supplemental row containing the spill over beer) is all from well established craft breweries with nary a MillerCoors product in sight.

A shopper near me commented on the selection and the organization, saying, “it’s really nice to be able to come in, grab some bombers and maybe a six-pack without having to dig around for it.” When I asked him if the variety encouraged him to try new beers he said, “yea, definitely, but I really feel overwhelmed having so many options sometimes.”

They are still a business though, and offer the middle of the road stuff, it’s just not given prominent shelf space. Most can be found in the coolers that line the back wall (where the big-screen TVs used to be). 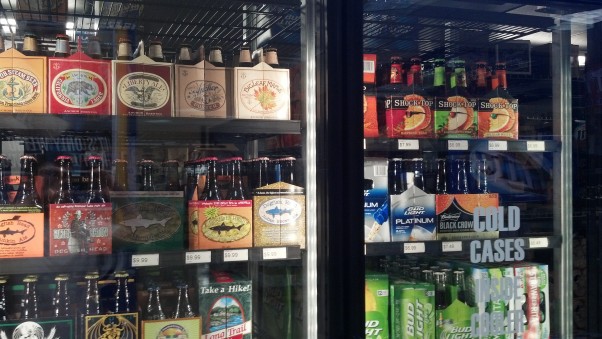 I’m not sure what’s up with Shock Top always being adjacent to Anchor Brewing.

This store obviously caters to the craft fans more than the macro beer fans, but they don’t seem to be hurting financially. The displays and proper categorization make it easier for buyers to find the beer they’re specifically looking for, but also find new beers of similar style and quality.

This store, run by a lovely couple who know me as that “weird homebrewer guy” is within walking distance of my house. The sub-1000 square foot shop has everything from giant sticks of incense to vodka, from Keno to craft beer, making it a perfect microcosmic slice of the local, independent American booze shop. The owner proudly announces that he makes all of his own purchasing and layout decisions with minimal input from the distributors.

The prices here tend to be a bit higher, but not so high that I’d go out of my way to shop somewhere else. He will also almost always stock a beer I ask for, if it’s on his master beer list.

The store is tiny compared to the other two I visited, and the beer has to fight for shelf supremacy against liquor, wine, and non-alcoholic drinks. This relegates it to a few coolers in the back of the store with a small display of seasonals in front: 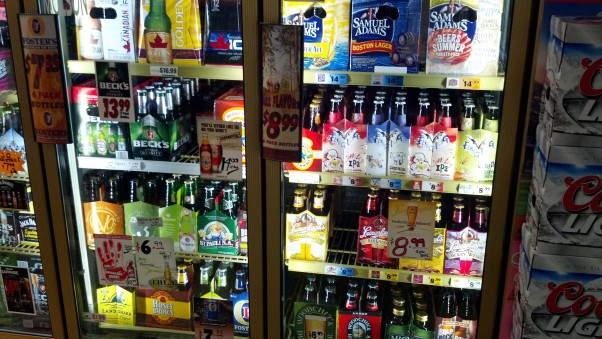 Handles with prices? What a world.

The owner explains that he’s not much of a beer guy, but understands the difference between the ABInBev/MillerCoors stuff, and the stuff he gets from the local distributors like Flying Dog and Evolution Brewing. He initially arranges them how the distributors suggest, but will often move things around if one beer is selling better than another. He didn’t seem to care that Blue Moon was owned by Coors, he only cared that it sold pretty well.

He also had the issue of only having so much space. He claimed that “he’d love to keep the craft beer together” but given that he only have 8 coolers to work with, he had to put some next to “less appealing” beer.

Interestingly enough, I was the only one looking at craft beer during my time in the store. Three men and one woman came and bought Corona, Bud Light, more Corona, and some Yuengling (respectively) but not one of them even looked at the craft beer cooler.

Pretty pictures, but what does it all mean?

Based on the reactions of various people actually buying the beer, most seemed to appreciate some semblance of organization to help them find what they wanted quickly. Keeping all of the craft together also seems to encourage people to try new things, but only in people who came to browse, not those who had a specific beer in mind.

Interestingly enough, most people didn’t browse. They didn’t seem to care or notice that things weren’t in order or grouped because, by my counts (I didn’t dwell too long because I didn’t want to get kicked out) a majority (~ 80% of my woefully too small sample size) either walked straight past the craft aisle to the large cases of macro, or bee-lined directly for the six pack they wanted without looking at much else.

This suggests, to me, that people go into a store with the beer they want already in mind, and won’t really stray from that unless something really catches their eye. Most of the purchasing decisions are happening well before anyone is even looking at the beer on the shelf. It seemed that the level of order and grouping in Old Line encouraged people to look at, pick up, and even read about different beers, but the nature of that particular store suggests that those people were already interested in craft.