You’ve finally arrived at the intersection of inebriation, grammar, and Microsoft Word. You want to pour your love of beer out of the glass and smear it all over the page. You don’t want to be stuck a mere drinker; you want to transcend, elevate, lift yourself up in a rush of carbonated glory. Good for you! Admitting you have a problem is the first step to becoming a beer writer.

But the first step, in this case, is nowhere near the last step. Being a beer writer isn’t all strolling down easy street, wearing your casual Ugg boots, whistling “Peaceful Easy Feeling.” Beer isn’t a matter of life and death; it’s much more serious than that. You’re going to have to commit to not only drinking lots of beers, but also drinking lots of beers. You may have to take time to appreciate flavors and smell decadent aromas, possibly with your nose. You may even, at times, when things get really intense, have to go out with your friends to drink beers.

But if you’re committed, I’m here to help. The information below is part one of a primer to transform your regular old prose into luscious lager literature. I’m happy to answer any questions in the comments, too.

Any good writer knows her verbs are the real pack mules of the syntax, lugging all that context on their backs without so much as an angry bray. The beer world affords a writer a bevy of excellent verb choices, namely those associated with liquids, drinking, staggering, and hanging (over). If you’re trying to up the ABV of your blog posts and articles, strong beer verbs can make all the difference. See “she opened the beer” verses “she wrenched the cap free.”

Here are a few of my favorites (in infinitive form):

Brewing-related: to ferment, to flocculate, to mash, to stir, to boil, to roll, to pitch, to rinse, to sanitize, to cool, to rise, to sink, to measure, to gauge, to float, to attenuate, to prime, to bottle, to carbonate, to cellar

Beer-sound related: to hiss, to pop, to sizzle, to fizz, to glug, to chug, to gulp, to cheer, to clink, to clunk, to plink, to crack, to toast, to sing, to yell

Beer-action related: to pour, to glass, to barstool, to order, to bitter-beer-face, to pry, to wrench, to twist, to nose, to sip, to savor, to tongue, to raise, to grasp, to slam, to session

Beer-effect related: to smile, to laugh, to hug, to proclaim, to embelish, to haze, to blur, to lurch, to occilate, to waiver, to stagger, to wretch, to drunk-dial, to wrestle, to put-your-leg-over-the-edge-of-the-bed-to-stop-the-spins, to vomit, to pass out, to pound, to thirst, to hunger, to regret, to swear

There are of course hundreds more. Don’t be afraid to verb a noun if it seems fitting. Shakespeare did it, and he seems to have done pretty well for himself.

At times, when home brewing your own word-beer, slight miscalculations in syntax temperature or literary recipe can lead to unwanted off-flavors. These are easily avoided by carefully paying attention during mash-draft. Some common off-flavors to watch out for:

Pallet vs. Palette vs. Palate

Unless you’re talking about moving a bunch of cases in a warehouse or are literally planning to paint with your beer, the correct spelling of the tasty portion of our mouth is “palate.”

To drink is probably the most important verb in a beer writer’s keg-o-verbs, but it vexes many people because its past participle, “drunk,” can be a verb, a noun, or an adjective, depending on its role in the sentence. To add to the confusion, as a verb “drunk” requires an auxillary verb (to have, to be) to be used correctly. You wouldn’t say “I drunk the beer” unless you were already ten deep. An easy rule to avoid mistakes in obscure sentence constructions: check for a “be” or “have” before the word. If there is one, use “drunk” (The beers will be drunk tonight). If there isn’t, use “drank” (I drank the beer).

As an added grammatical bonus, here’s a full list of tenses for “to drink”:

There, now you are never allowed to mess up “to drink” ever again. 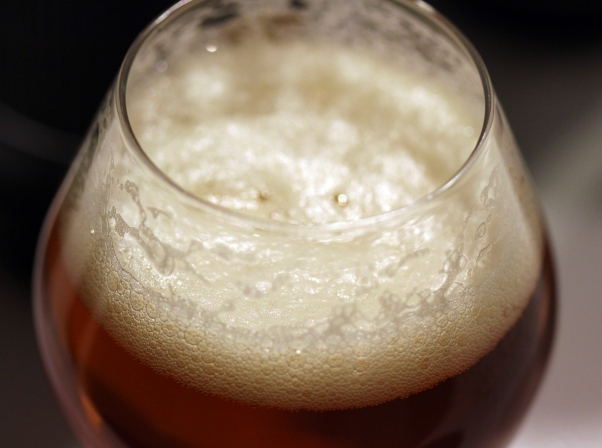