Our names hover around us, a jumbled aura made of letters, arbitrary labels that give buckets of context about who we are before anyone even sees our face. Those few syllables can betray our sex, our nationality, our spirituality, even somtimes our rough socioeconomic standing. They’re the vanguards of identity, the first thing you ever give to a new friend, the last thing that marks your time on this planet.

Those omnastically inclined few may have done their research, know the countries of origin or the historical minutiae that led to their naming, but I’d be willing to bet a large majority don’t know much about their own last names. A few have it easy: the Coopers and Smiths and Millers can thank the strong and capable hands of their ancestors for their vocationally inspired names. The Johnsons and Jacksons and Thompsons can thank contemporary mankind’s obsession with paternal lineage. Those nouns turned names have it arguably the easiest, so pipe down there, Pope, King, and Woods.

I should note, too, that those examples only skate across the surface of Anglicized monikers. A mere handful that don’t touch the beauty and mystery enveloping the hundreds of thousands of names that paint a nominative rainbow of multiculturalism across the canvas of our planet. There are so many names, so many variations, so many interpretations, that it’s amazing we don’t all have to wear name tags at all times to get anything done when working together.

Some names aren’t as easy to source. Black, Brown, and White may seem obviously self descriptive, but what about Green, or Moody, or that one so close to me, Gray? Basic history says my name traces back to Gaelic (making it Scottish or Irish, and in turn explaining my red facial hair) but beyond that it’s only moderately educated guesses. The trail meanders back to the pronouncial mouthful – Ó Riabhaigh – meaning son or grandson of “the gray,” which may echo the foggy moors of our ancestral lands. One scholar even suggests it had to do with a “countenance of character,” in that my ancestors were sullen, quiet folk.

But it might, if I knew more Grays. I like to pretend I’m the last male in my line now that my dad is gone, the last one able to carry the proverbial torch and pass the four familiar letters onto my son. But I’m not. My dad had a brother. My uncle had four sons. Out there, somewhere, in the land of severed blood ties and family feuds, I have four cousins. Four more Grays, who, for all I know, could be just like me.

I knew their names once. I think as a kid, I even met them. But my dad and my uncle had it out after my grandmother passed; money was hoarded, childhood resentment flared from ember to inferno, and just like that, the idea and memory of my cousins disappeared across the salty waves of estrangement and Atlantic.

I’ve started looking for my uncle, but apprehension always stays my mouse hand before I delve too deep. From what I’ve heard, he wasn’t a very good person. He’d caused a lot of turmoil in their childhood home, ever taking, rarely giving, monopolizing the love and resources of my grandparents while my father was left to solve the Rubix cube of the world on his own.

I don’t know if he’s still alive, and part of me, out of loyalty to the memory of my dad, wants to see an end date after the hyphen in his records. Somehow, it would make me mad to know my uncle survived where my father didn’t. It sounds terrible, and I feel terrible, but honesty never pretended to be kind. I only have the feelings my father left me, and no matter how hard I try, that resentment never heels to hereditary curiosity.

I instead like to look forward. Think of my name as it is now, and as it will be. I could spend hours digging at the graves of memories long interred in family lore, only to find nothing but more riddles in the bones and dust of the past. Or I could spend my time turning this name into something my father would be proud of, shouting it out into the world on the back of my words so that everyone knows that this Gray has no issues with countenance of character.

Pride, not regret. Future, not past. Our names define where we came from, and against our will, a good portion of who we are. But that doesn’t mean they seal us into any one fate. They are, after all, just humanity’s way of categorizing mind boggling diversity, like a massive genetic library’s Dewey decimal system.

You may not be able to control which section of the library you’re in, but you can control who checks out your book. Make sure your surname stands proud on that spine. 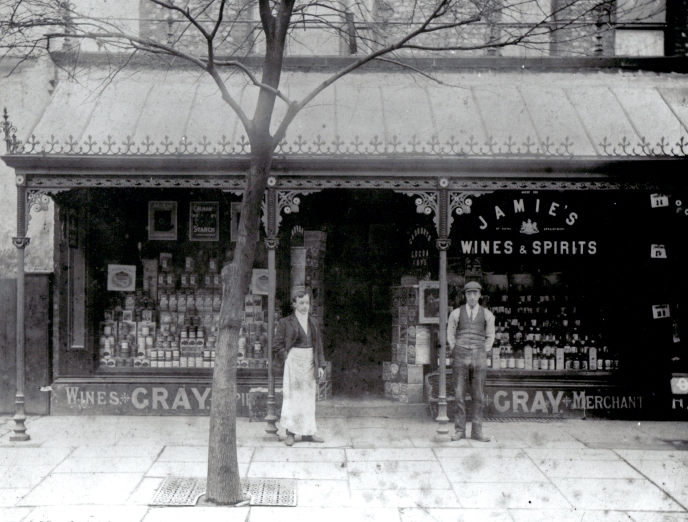 My great grandfather (apron) and other dude possibly related to me. Manchester,  England – c. 1910