I made a promise to myself last year, after I burped the last of my cinnamon and spice binge into the ether. I swore, to the old gods and the new, to my inner demons and guardian angels, to all the demigods of diet and phantasms of flavor. I vowed and declared and committed not to give in to the siren song of gourd whispering to me on the autumn wind, that this year in beer would prove different.

I made an oath in those dark winter months, in the foggy hangover of post holiday splurge. I signed it with the alcohol in my blood and the sugar on my breath. A contract with one a relatively simple clause: do not drink any pumpkin beer until at least October 1st, 2014.

It was not an agreement I entered into lightly, for my weak, mortal side craves the succulent orange flesh in pie, in coffee, in all unholy abominations of pumpkin and product. I know it’s wrong to lust after brown sugar and nutmeg, to let a cultivar cultivate my destiny, but I’m just a man. Seasonal creep sneaks and slithers onto me, seductively suggesting I take a nice clean bite from that orange apple, season and weather be damned.

At first, I held strong. Summer’s insistence on postponing his vacation to the other side of the planet gave me strength. The orange, brown, and black of the labels did not sway my conviction, and I walked past them boldly, bravely, to other, less obnoxious fermented fare. The Pumpking held no regal power over me, the Great’er proved lesser. IPAs bolstered my resolve, and Marzens marched across my tongue and down my throat in a delicious cavalcade of beverages that were decidedly free from pumpkin. I thought I could do it. Thought the vine fruit would be defeated, left to bake until its time was ripe some time near Halloween.

But such dark energy is not to be denied. The pumpkin, knowing my devotion to the cause, summoned his darkest agents, the most twisted and malevolent of his creations, to bring me back into the fold. Little by little, day by day, the jolly jack-o-lantern chipped away at me. Every sign of Fall, every crunchy brown leaf, every slight whiff of cloves or ginger fed the entropy, increased my desire to sup at the forbidden table, sip from the forbidden cup.

From the soul of his stout, inky black soul, he captured, raptured, and ultimately tore my pledge in two. I let his eight armed ABV wash over me, surrendering, suffering, savoring.

I drank the Warlock. I broke the oath.

I am the warlock. I am the oathbreaker.

And now as his energy surges through my veins, I know that no matter how silly or sickening, how gimmicky or gauche, I will give into him, because hot damn, I love pumpkin flavored crap. 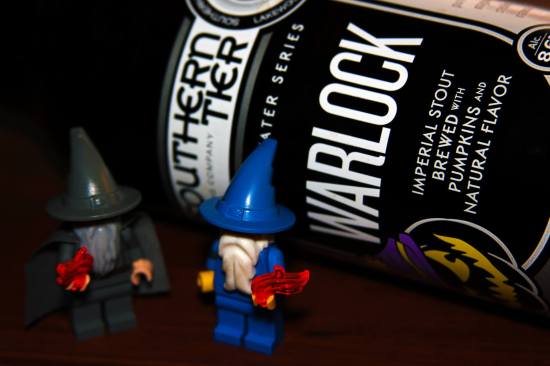