I know there wasn’t a lot of exciting stuff going on in South Dakota in 1927, but I’m amazed that someone let Gutzon Borglum climb up on Mount Rushmore and start dynamiting whatever he felt like in the name of art. If someone said to me, “Hey, I’m going to use explosives to carve giant heads and faces of famous people into the side of that mountain!” I’d probably have them arrrested, not offer them funding. Retroactively I suppose we should be appreciative of his penchant for granite boomsmithing, as he incredulously created a national treasure where only a geological treasure had stood before.

I’ve never physically seen the four mugs that gaze austere and stony over Keystone. But it’s an iconic image that has bombarded my vision for as long as I can remember, in text books, on classroom walls, in movies where protagonists somehow always end up in George Washington’s nose. Mount Rushmore stands as a testament to man’s temporary mastery over nature, his desire for unity through nationalism, his ability to immortalize individuals for their contribution to society and country in any number of mediums (including very dense stone).

Josh Short, amidst some other ramblings with beery friends, came up with an idea to replace the four presidents with the four people we thought were the most important to “beer.” I think he meant “modern beer” but I interpreted it as “beer as a cultural and historical force.” If it were the four most important people of contemporary “craft” beer, I think Jim Koch, Sam Calagione, Ken Grossman, and Fritz Maytag are the obvious choices (although I’d probably save room on either side for the future additions of Jack McAuliffe and Charlie Papazian, too).

But my mind had already wandered, and I pretty quickly settled on the four historical figures below, whose contributions to beer (or, I should say, brewing) would make them perfect candidates for being exploded into some mountainside in the remote wilderness of the Great Plains. 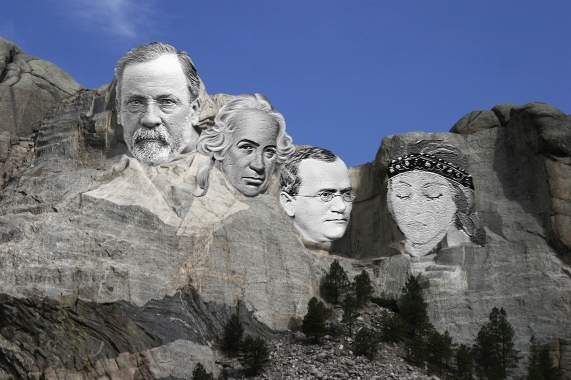 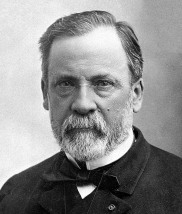 This dapper Frenchman identified and described yeast as the microorganism responsible for fermentation. Prior to his work, many brewers legitimately thought fermentation was a form of divine or natural magic, and that to drink alcohol was to commune with the gods (that may yet be accurate, ecumenical jury’s still out). As we should all know by virtue of high school biology and anthropology, yeast is fundamentally important to modern society, and integral to the general homeostasis of the planet. We owe the broad selection of commercial yeast strains, and vis a vi the broad selection of beer styles to the work of this genius. He also wrote a book called Studies on Fermentation: The Diseases of Beer, Their Causes, and the Means of Preventing Them, meaning he wasn’t just a microbiologist with an awesome beard, but one of the first modernist beer writers. Swoon. 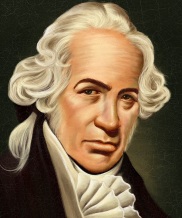 If you’ve ever brewed, you know just how important temperature control is during the creation of delicious beer. The temperature of mash rests dictate the length of sugar chains you’ll extract from your grain, the temperature you pitch your yeast can make or break a fast and efficient fermentation, and a few degrees up or down during actual fermentation can lead to off-flavors and other unwanted, unexpected results. Temperature control is law, making Daniel Gabriel Fahrenheit, inventor of the mercury in glass thermometer, the aribter of hot and cold. Even though mercury has pretty much been phased out because it was “dangerous” and caused “brain damage” we still owe Fahrenheit a debt for helping us monitor and control our brewing processes. Don’t even get my started on that skinny-faced Celcius punk. #DGF4lyfe

What’s your favorite variety of hop? What’s your favorite base or specialty malt? Hard to decide? Thank Gregor Mendel. While someone would never really associate him with beer (he was an Augustian Friar but did live in what is now the Czech Republic, so his drinking habits are up for debate), his work on genetic heredity and selective breeding lay the groundwork for all modern agriculture. Cross-breeding pairs to select for desired dominant or recessive genetic expressions was this guy’s idea of a kickass Friday night. Mendel’s entire record collection contained only one song: Starship’s “We Built This City.” But when they sang “rock and rooooolllll” he sang, “Punnett squaaaareees.” We owe our wide selection of hops and malts to the Mendelian tenacity for overcoming the tedious, and modern beer (I’m looking at you, dodeca-hopped IPA) wouldn’t be the same without his influence.

Osmotar of Kalew, also know as “Osmotar the Brewer” was a badass viking brew-lady featured in the Finnish epic poem, The Kalevala. My love for her is only tangentially associated with my love for Katherine Winnick’s portrayal of Lagertha Lothbrok. As the middle part of the poem waxes voluble, we seen Osmotar preparing barley and hops for brew, fulfilling her important societal duties to keep everyone nice and drunk. Osmotar is a microcosm of a huge world of historical female brewers; without women keeping the beer bubbling and flowing, we may have lost much of the art.. Beer owes it’s longevity to those women who kept brewing while the men were off doing whatever it was Finnish men did (probably throwing coins at cups and cutting people’s heads off, if TV is to be trusted). While modern beer is male dominated, our history is venus shaped, estrogen fueled, held together by the fibers of hundreds of thousands of Osmotars who’d probably make us look like terrible brewers in comparison.

That’s my four. Who would populate your boom-carved rocks?

This post is part of multiple essays from Mid-Atlantic beer bloggers discussing who they believe should be remembered for all-time, thanks to the influence they’ve made on the beer drinking world. Additional posts on the same topic, by some wonderful writers, can be found here: