Seven years ago, I held a bunch of seeds in my hand. A herbaceous menagerie piled lazily in my palm.

Some I’d had since birth, stored away by my parents in little bags and boxes until the soil was fertile enough to plant them. Others I deliberately picked out myself after years of scrutinizing plants and perennials, flowers and fruits. Others yet appeared as if by natural magic, wild and weird and full of unknown potential. My future rested there, dormant and dry, needing naught but my time and energy.

On one side of the garden, I prepared the soil. Spent years learning the inborn dos and donts, uncovering how best to make the seed yield a plant that would yield a crop. I thought I knew which seeds went where, which I wanted and suited me best, which would grow the fastest, the strongest, the tallest. Armed with oddly specific education, I dropped these seeds into the tilled dirt with utmost care, careful to spread them out evenly, set them deeply, water them diligently.

On the other side, I haphazardly scattered those random mystery pods that had mixed in with the rest, unsure how to make them grow, of if I even wanted them to grow at all.

The sun shone and rains fell. The earth turned in the sky and on the ground, the work of worms and wormholes. The seeds took root, extending their little legs into the ground around them, building a base before shooting tender probes out from the safety of below, to peek out at the above. As expected, the seeds I had planted with dedication grew first, in clean, traditional rows that at first, looked healthy and bright.

But then something wholly unexpected happened. The random seeds, despite a lack of research or education or attention, began to sprout too. They popped up here and there, some spindly some leafy some altogether bizarre, but all of them healthy and in some ways, miraculous.

For a few years, I focused on tending the chosen set of seeds; spent most of my sunlight hours weeding, feeding. They grew steadily, and after a short amount of time, required significantly less care than I had originally expected. This left time open in the fading twilight of most days. I turned my attention to my random sproutlings.

By now, they were bushy and broad, almost antithetical to my organized rows on the other side of the garden. I took some time to learn what they were now that their true identities had burst forth from the seeds, and found that what I’d accidentally planted was actually really cool. The plants proved much more exotic and engaging, and unlike my slow but steady growth on the other side, some grew rapidly with next to no direct input from the gardener.

I began to split myself in two; tending my faithful crop as always, but finding myself spending more and more time cultivating the growth of the randoms on the other side. Some days I’d neglect my planned garden entirely, lost in a verdant bower of intertwined barley and hops. All the plants thrived, but my original plan, to grow and cash in on a traditional crop, suddenly seemed lacking, when the possibility of a much more exciting but much less consistent path opened up to me like a tulip on a sunny spring day.

It’s almost time to harvest, at least for the first time. Despite the balancing act, both sets of plants have budded and nearly come to flower; their nascent peak, my mental pique.

I’m at a horticultural precipice. I have a decision to make. I know that once they flower, it will be impossible to keep both alive. If I choose one side of the garden to devote my attention to, the other will wither and die. I’ll lose the invested time and resources, the connections and friendships I’ve made with other gardeners and farmers, the proprietary industry knowledge that might carry me into the future. But if I don’t make a choice, neither crop will flourish, and I’ll be left a failed gardener, with little to show for my half-decade-plus of work.

It’s not an easy decision to make. Safety or adventure? Boredom or risk? My thirty years around the sun haven’t helped clear up much, and I stand, staring at my plants, wondering what the hell to do.

Seven years ago, I held a bunch of seeds in my hand. A future, maybe, but not the one I planned.

How can one make a decision now that might affect his always? What does one do when waiting for a flower to bloom? 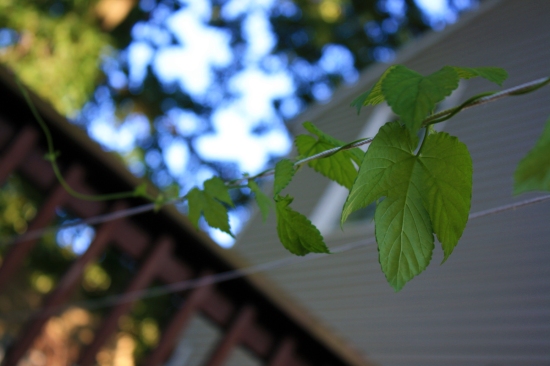