(Preamble: if the Session continues to stick around for a while, I think the submission period should be a week [first Friday of the month to second Friday of the month]. I got a lot of great entries well after the Friday deadline. 2 cents.)

I suppose I should have been a little clearer in my description of the Session topic. I wasn’t (as Stan Hieronymus hinted at) experiencing an actual mid-life crisis with existential meltdowns and brightly colored Corvettes. I’m only 30, and my life is pretty damn good. It was more a mid-hobby crisis. Fortunately, it seemed a topic lots of people wanted to discuss, and lead to some very thought provoking posts.

The good news: aside from a few outliers, pretty much everyone responded with, “It’s not beer, it’s you, Oliver. Get over it or get out of it.” It’s reassuring to hear, as it means the industry isn’t collapsing under its own weight, as I had oh so hyperbolically thought. It’s also reassuring on a personal level, as it means my own beer writing salvation is but some time and introspection away.

But I digress. Back to the matter at hand. We had sixteen (16!) entries this month. I did my best to corral all the entries from the different media streams, but my apologies if I missed you. Shoot me an email or tweet if I did, and I’ll amend the recap.

I’m also splitting this into two posts, as each roundup ran nearly ~1500 words and I don’t want to kill people with walls of text. Here we go!

Boak and Bailey, our blogger friends from across the pond, responded first, describing their version of lagging beer interest as a “Wobble” (with some excellent use of Willy Wonka lyrics to open). Despite being jaded, they weathered the wobble, and found their enthusiasm for the drink and industry revitalized. To those feeling wubbly or wibbly or wobbly, they suggest one of two courses of action: 1) “Leave the learning and exploring phase and enter steady state” (read: enjoy your beer and the fact that you know too much about it peacefully) or 2) “Embrace the mania fully” (and be “that” beer guy). I won’t deny the appeal of the first, but the second seems far more fulfilling, if a tad more annoying to your friends and family.

In what I believe is a Session first, Michael Kiser of Good Beer Hunting chimed in. Mr. Kiser flattered me enormously (yay!) but then directly disagreed with my assessment of the state of the beer union (boo! just kidding). He goes on to describe himself as ripe for an aforementioned actual mid-life crisis, but feels beer has been his agua de vida in ways, and his connections to the people that define the future of the industry are what keep him excited. An anecdote from the Craft Brewers Conference showed a natural juxtaposition between those who view new breweries as competition, and those who seem them as opportunity. As writers, we are the latter, and if Michael taught me anything here, it’s that I should ignore the political industry noise and embrace the new people and perspectives: “when they look across the tap lineup at their neighborhood bar, they don’t see AB or MillerCoors. They see you.”

On that note, Tom Cizauskas of “Yours for Good Fermentables” wrote a post titled simply: “Enjoy the beer, forget the hype.” Tom got this idea rolling early, with a comment on Alan McLeod’s reaction to my initial Session announcement:

“There’s beer as a business; beer as tax revenue; beer as science and technology; beer as one (small) study point in history; beer as an alcohol delivery system; beer as a diverting avocation. Each except the last is specific to a limited concern. A loss of interest in the last calls for a new hobby. There’s little semiotic about it.”

I want to thank Tom, as this is something I really needed to hear. I have a tendency to over-analyze and over-internalize, seeking meaning and the resulting epiphanies constantly, even where there might not be any. Especially related to those things I’m most passionate about. In his post, Tom encourages us to assuage our ennui by letting go – of “craft” and solipsistic declarations of identity – and instead “meditate on the joyful pleasure implied by the simple phrase: “Let’s go grab a beer.”” This is good advice that I plan to follow.

In his expected form, Alan McLeod gave us a post with a touch of history and some great insight, including this, which hit home for me:

“Good beer writing should be directly dependent on an interest in beer and brewing. But there seems, if social media reporting on tavern and bar attendance at #CBC16 is anything to go by, to be the idea that a commitment to daily strong drink is a requirement as well. Why is that?”

I find myself drinking much less these days, and if my thinking is aligned with that implied in Alan’s quote, perhaps that explains my disconnected feeling. But he makes a good point. You don’t need to be a lush to write about beer. In fact, clearer heads probably lead to better writing. He goes on to suggest that beer writing has been pigeon-holed and “framed too narrowly.” I can’t disagree.  His closing is wonderful advice for any beer writer, from newbie to veteran:

“Once you realize that you do not need to join the herd, you may see there is so much more to explore. Once you realize so much of what’s touted in the glass is overpriced yawn water you can detach yourself from the need to impress – or be impressed – and explore this massively rich but still largely untouched seam of human experience, the lode of beer and brewing.”

+100 internet points to Bryan Roth for being the only other blogger than me to use Lionel Richie lyrics in his Session post title. Given some time to digest the other entries first, Bryan noted how he’s actually feeling great about his place in the beer world, finally realizing that his remote pipe-dream of being a functioning member of the industry is now, some years later, a very near reality. He echoes Michael Kiser’s comments about 2000 new breweries meaning 2000 new opportunities to meet new people and see new places, and more and more space to grow and write about they myriad aspects of beer. Bryan is a perfect example of Boak and Bailey’s advice to embrace the mania. I dig it.

The Beer Nut (the special Irish variant, not to be confused with the 250,000 American imitations) opened his post with an acknowledgement that he has witnessed a steady thinning or his beer blog RSS feed. He then goes on to explain that he doesn’t feel his energy or enthusiasm waning, part in thanks to keeping “governing rules:” his regular posting schedule keeps him too busy to get introspective and worry about silly things like a beer mid-life crisis. As someone whose blogging schedule is little more than what comes to him in the shower that morning, I can’t help but envy his discipline. He even adheres to his own rules in the Session entry, giving us brief introductions to five Irish beauties. This particular line stuck with me, as I had blamed this concept in part for my flagging interests:

“the industry itself (at least in the US where Oliver is) seems to be suffering a bit of an upheaval. It’s hard to know where you stand as a fanboy blogger when your favourite brewery is liable to be snatched away from you by a grasping multinational”

Gary of “Beer et seq” noted that to him, keeping interest in beer is all about taste. Literally. Gustatorily. He posits that flavors define the mystery:

“It never really ends, there is always more to learn. The beer palate is the core of it for me.”

I agree with Gary. All manner of information and ideas can be derived from how any why a beer got to its final, taste-laden form. Going back to ones roots to focus on what matters (to you, specifically) is usually a healthy recommendation. I would more likely return to homebrewing and recipe building, but really, all things considered, that would just be the other side to the same coin: refining your love and continuing your search for those elusive, ideal tastes.

Barry Masterson (friend of the Beer Nut, and also an Irish expat living in Germany) says in his post a lot of what I’ve been feeling. Like me, he had many conflicting obligations (pesky “jobs” and “responsibilities”) going on in his life that kept him from going all-in on beer, until, as he puts it, “With my lack of time and money, to a degree it felt like watching from the outside.” It’s as if Barry took those words out of my brain and put them into his own. There’s nothing quite like being completely immersed in something then taking a step back for unrelated reasons, to make you feel like an impostor and outsider where you once felt part of the inner clique (weird and shallow, I know, but honest I hope). Also like me, Barry never actually lost the love his love for new beers or brewing in all of this, despite his cynicism. Barry closes with some good news: if I’m really anything like him, I’ll rebound soon enough, if not quite in the same capacity as I did before.

Tune in tomorrow for Part 2! 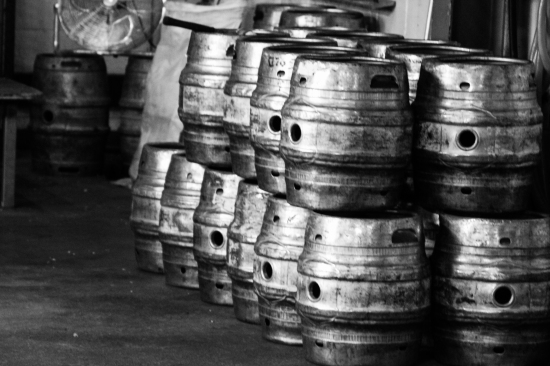