On March 28, 2011, AB InBev admitted defeat. One might think the day they bought Goose Island Brewery would be one of victorious celebration. It marked their first major foray into the then “craft” segment, and potentially showed their willingness (and ability) to diversify their pale lager heavy sales portfolio.

But in the midst of that win, there was also a loss. A quiet acceptance that the subset of beer drinkers who’d only bought their beer because they had no other options suddenly did. An acknowledgement that those consumers actually had some power, and perhaps their fringe tastes were now mainstream enough to not be ignored.

I think it’s probably how Hillary Clinton, most Democrats, and even some Republicans felt on the morning of November 6,  2016. With bleary eyed recalcitrance the entire political establishment watched as the status quo melted, just a little bit. The orange blur on the horizon of the future was not just a business-as-usual changing of governmental hands, but a sign, albeit tiny, of a change in the winds on the sea of sameness the governing elite had always sailed.

As much as some IPA loving liberal folks may hate to admit it, Donald Trump won the presidency using the same kind of ideology craft brewers used to wedge a foot in the door of domestic macro lager’s dominance.

It may seem odd to compare a style of beer to our new tee-totaling president. Obviously IPA didn’t cause the craft segment to rise so quickly on the back of silly acronyms and populist rhetoric, and Trump didn’t win the election because of his overabundance of Mosaic hops. But they both represent a key ideal of the American republic: the ability of people, when given a rallying cry and common enemy, to slice right through the soft belly of those sitting complacently on the throne.

The US political system has always been polarized by left and right leaning mentalities, but still managed to retain that singular semblance of “as is government” no matter who was in office. For most Americans, a loss to the other party maybe meant you were bummed out about taxes or spending going up or down, but in periods with no major social or military upheaval, the person and party governing were sort of inconsequential.

That was American beer, for the last ~60 years. Didn’t really matter what you bought, as it all kind of tasted the same.

Enter our first reality TV president. Sure, he’s Republican on paper, but who he is and how he acts is antithetical to what most of us had come to know as a “normal politician.” He lacks nuance. He’s in your face. He’s often unbalanced and leaves a bad taste in your mouth.

He is, without hyperbole, an American IPA.

And that’s exactly what the people wanted.

The reasons the craft beer segment did so well are myriad. Identity politics tied to products, groundswell support of local, inclusive warm-and-fuzzy community, well-timed PR and marketing swoops. I’d even go as far as to credit the fundamental underpinnings of capitalism for this hop-born renaissance of fermentation.

Americans are not the kind of people who do well when picking between subtly different options. They want easy, binary choices. To me, the reason IPA did so well is because as a style, it stands in sharp, technicolor juxtaposition to pale domestic lager. The two beers almost couldn’t be any different and both still be beers.

One is unflinching, boring but approachable, traditional, easy to drink, consistent.

One is wildly mutable, tasty but complicated, niche, aggressive, volatile.

The people chanting “Make America Great Again” wanted change. So did the people who scoff at Miller Lite taps, and always order the hoppiest beer they can find. A large enough group of people analyzed the status quo and found it wanting, challenged it, and transposed their reality onto everyone else’s.

For good and for bad.

The presupposition we’re forced to accept in this scenario is that change is good. I’ve heard the fallacy echoed so much now, I almost believe it. Anything was better than another “establishment” president. Any beer is better than “fizzy yellow water.” But that only works when we also accept that what existed before the change was icky and terrible and legitimately required change.

It’s not a perfect analogy to compare Hillary Clinton to a mass market lager, but in the context of the 2016 election, she was. More of the same, something a lot of people drank just because it was there, and other options weren’t all that different. Lots of people also really, actually, genuinely like Bud Light. It’s got pedigree that you can’t deny, even if you, personally, do not like it.

A lesson that seems nigh unlearnable in the US in 2017: things that you do not like are not automatically bad.

Jeremy Danner of Boulevard Brewing Company has said it repeatedly: despite complaints from the craft crowd, Bud Light in not an objectively bad beer.

But rabid, zealous craft folks are quick to call it swill, faulting it for being exactly what it is supposed to be. They’re also willing to focus solely on the negative aspects of their adversaries, while rarely acknowledging problems on their own side of the world. Sort of like repeatedly focusing on emails while ignoring the infected IPA of a candidate you’re putting forward.

Here’s where the anti-Macro, Pro-Trump line of thinking loses me. There’s nothing to say the flip side of what is happening now will be better. While the craft movement gave us literally thousands of new options, it’s also more expensive, and plagued with quality problems. To the group of people who – not through ignorance, but through an experienced adult palate – voluntarily drank Bud Light, all these new beers are a waste of time and resources. It’s almost like we should come up with a phrase that warns people of misguided and unfounded expectations of change. Something about green grass maybe.

There’s one thing for certain: if AB InBev doesn’t campaign to keep Bud Light relevant – and perhaps get a few of their own IPAs in the game – then those vocal and active people looking to completely change the system will start to win more and more. The landscape -if we’re still extending this double metaphor to its already too stretched limits – will forever change, politically and zymurgically.

Even worse, if they’re not very careful, the final resting place of Anywhere, US might be in a hazy, New England town. 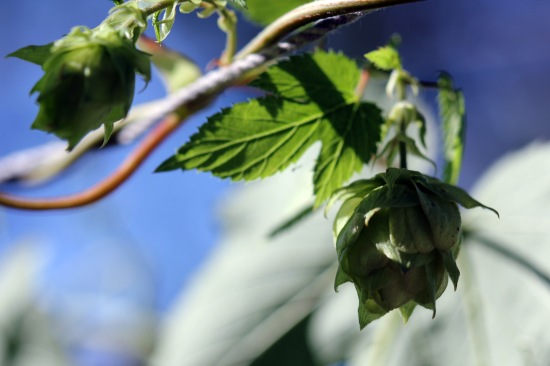