In honor of my first batch of all-grain beer, this week on LitLib is all about homebrewing!

I fell into my homebrewing hobby as a side effect of growing up in a household that consumed and appreciated a lot of alcohol. My dad used to make what I can only call “odd” wine: carrot, rhubarb, banana, and other things you won’t find at the local liquor store. Our basement was a menagerie of white buckets, glass carboys, empty green wine bottles, and a utility sink over flowing with sodium metabisulfite and thick bristled white brushes.

I learned how to brew the same way a kid learns how to use a Q-tip; through a lot of painful trial-and-error. One of my first batches ended up at about 2% alcohol because I added four gallons of water to a single gallon of actual brew. An early batch of English style pale ale had the delicious added flavor of rotten-eggs sulfur because I did the entire main boil with the lid on the pot. I never made anything undrinkable, but I certainly made a lot of beer only its brewer could love.

As my brewing skills slowly evolve, I spend a lot of time poking through homebrewing forums, looking up recipes, learning about proper yeast pitching temperatures, sometimes even stumbling upon a some unexpected pictures of pimped out kegerators. This has given me a pretty broad knowledge of various homebrewing techniques, but I still have yet to find a single, succinct overview of the very basics of brewing.

So I decided to make my own.

In addition to this guide, I am happy to answer any and all questions about the basics of homebrewing in the comments below!

Without sounding dense, homebrewing is brewing that is done at home, without commercial equipment. It usually means brewing on a significantly smaller scale (5-10 gallons as opposed to say, 7,000,000 gallons) with significantly less control and consistency in the final product. It encompasses beer, wine, cider, and any sub-genre therein, but does not include distillation, as that is illegal and should be left to those few (with even fewer teeth) in the Appalachian foothills.

Despite popular belief, homebrewing is pretty safe. There are some minor threats that come from over-filling or over-sugaring, but for the most part, it’s a low risk, high reward hobby. In a poor attempt at humor, Buffalo Wild Wings lampooned home brewers with a less than flattering commercial. The truth is that most homebrew, even the poorly sanitized or drank-too-early, isn’t going to send you to the ER with GI issues.

And if you don’t believe me, believe science! Yeast eats sugar and poops out carbon dioxide and alcohol, which has the added bonus of sterilizing the liquid. Alcohol disrupts the natural equilibrium of water outside of any bacteria cells, killing them as osmosis forcefully pushes water out of the cells to reestablish the balance. Thermodynamics are awesome. The only obvious health concern is mold, which aside from being visible and gross, usually makes the beer so foul tasting that not even the most self-destructive frat boy could stomach enough to make him sick.

So you want to be a home brewer?

First, ask yourself why.

If the answer is to save money on your alcohol, you need a new/better business model. While the ingredients-per-gallon cost is pretty cheap, you have to factor in equipment and opportunity cost. In the long run, you’re not going to save yourself an extraordinary amount of money by making it yourself.

If the answer is to impress your friends, I hope you’re patient. An ale takes on average 3-4 weeks to be ready to drink, where a lager takes 6-8 weeks. Wine of almost any variant takes even longer. Your first few batches won’t likely win any contests either, so it’ll be a while before your friends start greeting you as “Brewmaster.”

If the answer is for fun and because you’re so stubborn you have to try to do everything yourself, then you’re at least temperamentally ready to fire up your boil pot.

What do you mean you don’t understand these words?

Veteran home brewers like to throw around a lot of jargon and hardly ever qualify any of it. It’s like they expect us to figure these things out, as if there were some kind of widely available, magical book that contained definitions of things.

This is list of the things I had to discover on my own, but it is not nearly exhaustive:

Wort (beer) – a mixture of grain sugars and waters that will be fermentted into beer
Must (wine) – the same as wort, but with different sugars, including fruit pulp
Yeast – eukaryotic microorganisms that are obsessed with eating sugar and produce alcohol as a biproduct
Sugar – alcohol is formed in beer and wine based on the amount of added sugars, which are introduced to the brew bia fruit, grain, honey, or other sources
Sparge (beer) – the process of removing sugars from cracked grain using very hot water to create wort
Fermentation – the process of yeast converting sugars into alcohol
Primary fermentation – the initial conversion of the sugar into alcohol after yeast is first introduced to the worst/must
Secondary fermentation – the secondary conversion that removes extra sediment and allows time for the brew to settle/clear/mellow
Priming – adding extra sugar after secondary fermentation to promote carbonation in bottles/kegs/growlers (only applicable if you want to carbonate your beverage)

What will you need?

Before I get into the actual equipment that is necessary, I’m going to point out a few things you should have that often get overlooked by early brewers:

As for the gear (you can buy all of this stuff online, but be a good member of the community and pick it up at a local homebrew store, if reasonable):

You’ll also need bottles, growlers, or a keg for your finished brew, but that’s up to you (as I won’t be including bottling in this overview).

You’ve got all the stuff, now what?

This is a high-level, technical overview of the steps involved in brewing almost anything. Some specialty brews requires steps other than these, but that’s what a recipe is for! 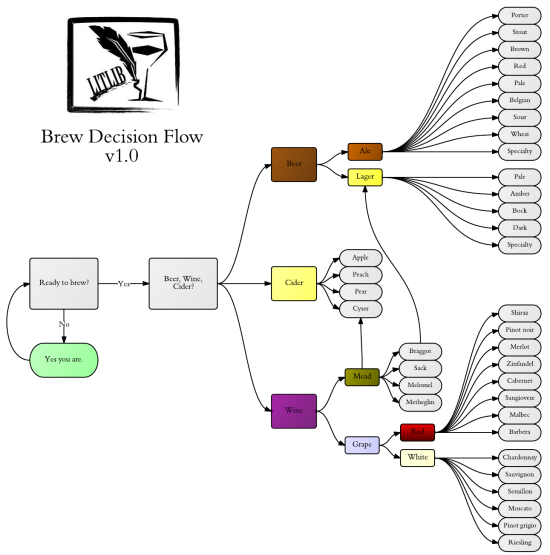