Maintaining a blog is a strange exercise in commitment. I really enjoy writing these posts and sharing them with my readers, so much that I actually miss writing them when I am busy with other, more pressing issues. But when I haven’t posted for a few days I am overtaken by a creeping guilt, the feeling that my readers may think me dead in a cornfield somewhere just because I haven’t posted timely updates.

Absurd, I realize. But hey, you need method and madness to put words on page.

It went well. Tiring and a bit unrewarding, but well.

As I completed my training sessions, collecting evaluations and answering questions (for the record, there are dumb questions), I started thinking that this was the most labor-intensive and mentally tasking thing I’d done at work in a long time. Instead of feeling sad that I’ve gotten so used to my responsibilities that I could probably do my job after 12 beers and a brisk run around the corporate headquarters, I started to think about how many people have much more difficult jobs.

This training seemed hard because I don’t often train people, and it was outside of my normal, numbing work. It really wasn’t that hard. I made it out to be harder than it was because it was foreign, not because it actually presented a challenge. At the end of the day, I’m glad I did it. It stretched my mind, and reinforced my delusions of grandeur.

I wonder if this is how Marzen as a style came to be. Were brewers bored with traditional lagers and wanted to try something new, just for the challenge? Were they sick of the overwhelming sameness of Bavarian beers in the sixteenth century? Did some master of brewage just wake up one day and say to himself, “Let’s mix things up a bit today, ja?”

I’d like to think so. In a sea of yellow lager, Marzen swims apart. It is bold and malty and decidedly different. Gordon Biersch named their version an “auburn” lager, which is self evident when looking at the picture below. Unlike other, more traditional lagers, the Gordon Biersch offering is sweet and mild, sort of like a light puff from a Cuban cigar.  I’m not in love with overly sweet beer, but this had enough lager hop to balance out the heavy malt flavor.

Quite nice. Protip: Drink AFTER the training, not before. 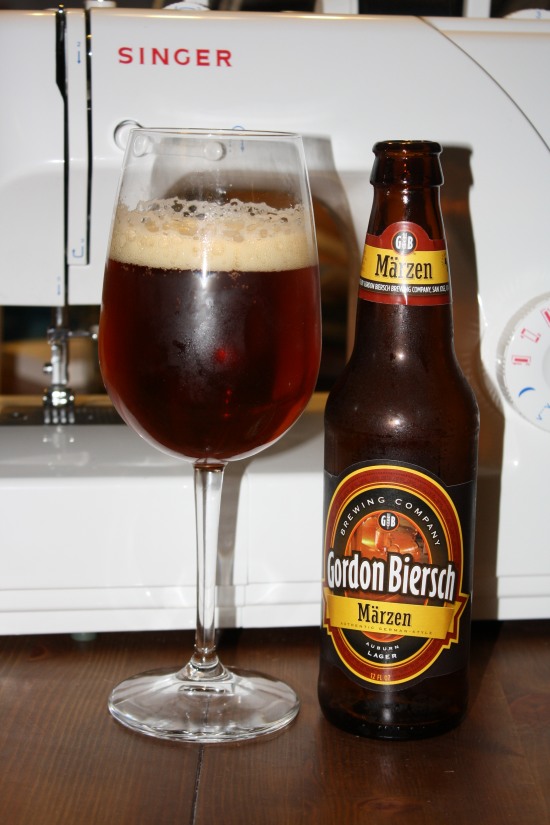 I sing the sewer electric.

Next up: Troegs Pale Ale!