For an unacceptable amount of time, I hadn’t anointed my tongue with Prima Pils, and had let Sam Adams Noble Pils, in all its noble, hoppy glory, reign as the king of flavor town. One sip immediately caused a coup in my brain; the loyalists of Noble Pils lining up in the corpus callosum, the revolutionaries of Prima Pils meeting them head on, glasses in hand like clubs made of delicate stemware. Then it got ugly. German malts and delicious hops everywhere. There is still a great-schism in my mind, two factions constantly warring over the holy pilsner lands, clashing at least once a month when I stand in front of a refrigerated case struggling to choose a six-pack.

Prima Pils carries with it the Victory Brewing pedigree than can be enjoyed in a few of their other brews: HopDevil, Golden Monkey, Storm King. They have a reputation for going big with the flavors and never going home, staying all night to party it up with the most hedonistic beer enthusiast. The word “prima” is a proclamation of joy, excitement, and success in German, and is definitely something I recommend yelling, inappropriately loudly for wherever you are, when you drink a glass of this stuff.

Where Prima brings the weight, the seriousness, the raw-heft, Gordon Biersch keeps it light and simple. Gordon Biersch (who many of you might know from the very massively displayed “GB” signs outside the restaurants that pepper various states in the US) is an odd mix between craft and mass produced. Some of their beers have hints of technique and artistic culinary flair but then you find out that they also brew beer for Costco.

Their Czech-style pils is competent, but unapologetically plain. It tastes like a beer brewed by committee, who decided what the best flavor balance would be with reports and statistics, not with what hops and malts went into the brew kettle. 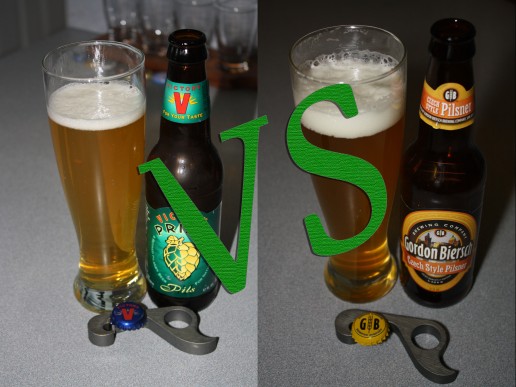 I don’t want to be mean to Gordon Biersh here; this pilsner is solid, tasty, perfectly refreshing on a hot day. It’s got a nice balance of subtle hops to mildly-sour malt and I quite enjoyed drinking it, and would drink it again.

But Prima Pils – holy shit – it’s like a battleship cruising the seas of taste. It fires 48, deeply bored cannons of perfect hop, blasting a hole of wondrous joy into the smoking ruins of your taste buds. Drinking this stuff is like convening with a deity whose sole purpose in the universe is to make your happy and warm your belly with perfectly executed post-beer-bloat. It is alpha, followed quickly by omega, followed quickly by alpha again as you pop off another top. This beer is good.

So, this wasn’t a really fair match up, but not much could stand up to the mastery of Prima Pils.

Next up in round 1 is the quintessential Pilsner Urquell verses one of the Rhineland’s best, König Pilsener. 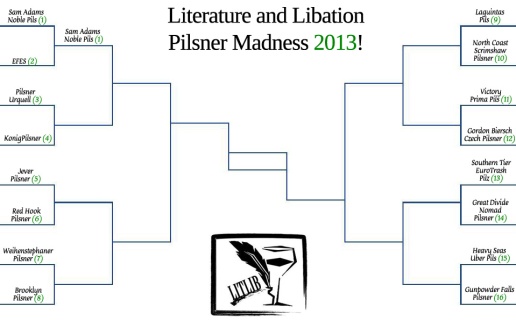 Pilsner Urquell (3) – When someone says “pilsner” most casual beer drinkers immediately think of this clear, crisp lager, the first ever mass produced pilsner in the world (according to SABMiller’s marketing people). Its origins date back to 1842. While not hoppy at all compared to an American IPA, Urquell is pretty hoppy when compared other pilsners, thanks to the generous use of Saaz noble hops. SABMiller also claims that soft water and fire-brewing (heating the brew kettle directly with flames as opposed to heated water or some other heat source) add to the unique taste of Pilsner Urquell.

König Pilsener (4) – Theodor König was a pioneer, brewing bottom-fermenting lagers well before they were popular. Brewed in altbier style, nearly as old as its competitor, Konig Pilsener has been gracing the Beeck area of Duisburg with its perfect balance and deliciously pleasant finish since 1858. König is currently represented by German producer, director, and actor, Til Schweiger (or Sgt. Hugo Stiglitz as you may know him) who often appears next to giant cans of beer of billboards throughout the country.

The two beers enter this match pretty evenly; both present well in-glass: straw yellow, earthy hop notes followed by a strong (if a bit sour) malty punch, airy pure white head that dissipates quickly. Each keeps pushing up and down the field, lots of complexity despite the simple formula, lots of hoppy progress both ways, but no real action. Everytime Urquell scores, König answers. This is going to be a close one, y’all.

Urquell loses the ball midfield due to a bit of over-carbonation and bite on the tongue. The turnover costs them dearly as König quickly capitalizes and finishes with practiced professionalism. Their well balanced team of flavors is just edging out the Urquell boys, who despite a great showing, can’t see to keep up with the nearly perfect grain-packed aftertaste.

And there goes the final whistle. A close, if somewhat uneventful match from these two classics. König 4. Urquell 3.

König Pilsener moves on to the quarters!

To buck tradition, I’m doing a linear bracket, where 1 faces 2, 3 faces 4, and so on. The full bracket looks something like (or exactly like) this: 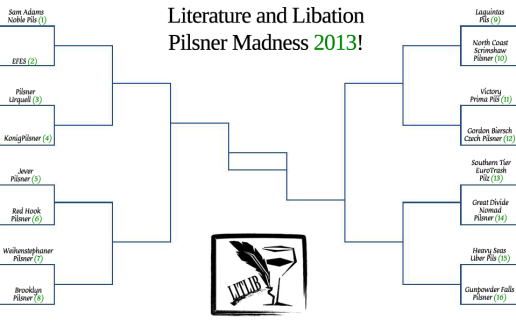 Sam Adams Noble Pils (1) – Noble Pils started life as the Boston Beer Company’s Spring seasonal in 2010, but was promoted to a mainstay of the Sam Adams brand (meaning it is available year round) in 2012. It was replaced by the new Spring seasonal, Alpine Spring.

I’ve already reviewed this beer and it’s impressive. When properly chilled and poured, this is height of drinkability: a complex but refreshing hop bundle, crisp finish, very little bitterness, and flavor that could beat the hell out of a lot of ales. The hop-heavy bouquet is a little odd for a traditional pilsner, but the pale bohemian malt really helps balance out what might be an overwhelming aroma and taste from all five noble hot varieties.

EFES (2) – EFES Pilsener is the flagship of the EFES beer brand, the number one beer in Turkey, and the main sponsor of the Turkish basketball team, Anadolu Efes S.K.

I’d never had this beer until I started my search for a bunch of different pilsners. The name and simple label caught my eye initially, and its popularity in Eurasia made it seem like a worthy beer to add to the list. Similar to some large production American beers, EFES adds rice during the brewing process which is claimed to give it a “unique” flavor.

Noble Pils starts this match out strong, pouring a deep golden color with a fresh, pleasing aroma on top of a thick white head. EFES comes out onto the field weak and confused, like it wasn’t ready to play today. The grass and cereal aroma dissipates into the March air as quickly as the small white head, barely lasting long enough for photographers to get any action shots.

Sam Adams strikes first: hops pass the flavor onto malts who come running up from the back field to score crucial flavor points. EFES tries to counter, but just kind of sits there smelling like corn. Sam Adams scores again as EFES tries to build an attack with a taste that is oddly reminiscent of chewing on the wrapper of a day-old bran muffin.

This game is painful to watch. Noble Pils keeps rocking the goal posts and the EFES defense and keeper aren’t even looking in the right direction. This sort of match up makes you wish there was a mercy rule in beer-sports.

And that’s the game folks: Sam Adams Noble Pils – 45, EFES – 0. This is proof that a large number of sales in Turkey doesn’t necessarily mean quality. 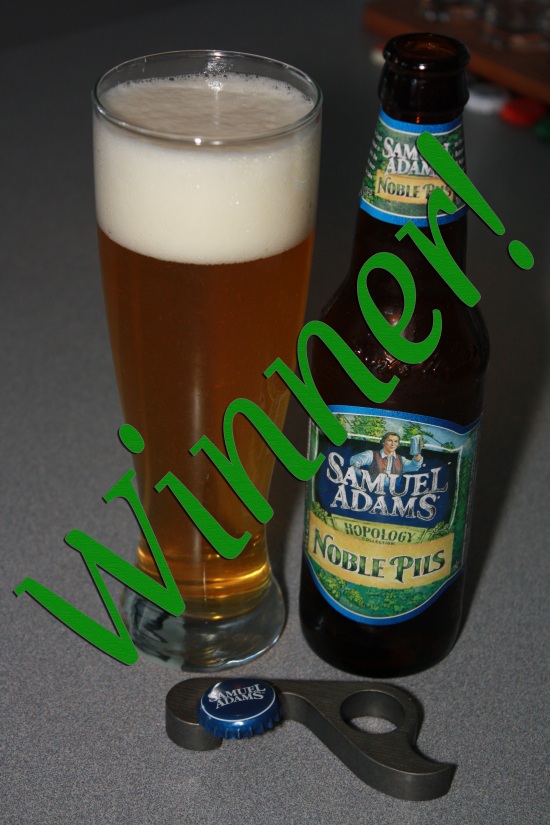 Sam Adams Noble Pils moves on to the quarters!

I am the worst basketball player in the United States of America.

I can’t do a lay-up. I have mastered the air-ball. I am incapable of dribbling with any sort of rhythm.

As a result, I never partake of any March Madness madness. When coworkers ask me to participate in the pool or fantasy league or just fill out a bracket for fun, I stand awkwardly in my cubicle, not entirely sure basketball is a safe thing for me to be around.

I like to stick to what I know: words, games, beer.

If you can’t beat ‘um, join ‘um. Or reinvent the whole thing so that it fits your specific interests and fields of expertise.

Through painstaking field work, sampling, and research, I have located and consumed 16 different Pilsner style lagers and pitted them against each other in a fierce battle for crisp, refreshing supremacy.

I only chose Pilsners because I had recently brewed one. I specifically tried to find beers labeled as “pilsner” or “pils” or “pilsener” and avoided any other pale or golden lager. The name, for anyone interested, comes from city of Pilsen in the Czech Republic where the style was first brewed in 1842.

Finding 16 Pilsners out of season was not an easy task. It took tens of minutes to scour the shelves of local beer stores to find what I needed. That’s commitment.

Without further ado, here are your contenders. They are seeded by the size of the brewery’s distribution (in barrels, converted from hectoliters for international brands):

Over the next few weeks, I’ll be posting dueling reviews of these beers, in a bracketed, single elimination style tournament. I’m using my wildly subjective opinion of each beer to determine the winners, so don’t be offended if your favorite gets knocked out in the early rounds. 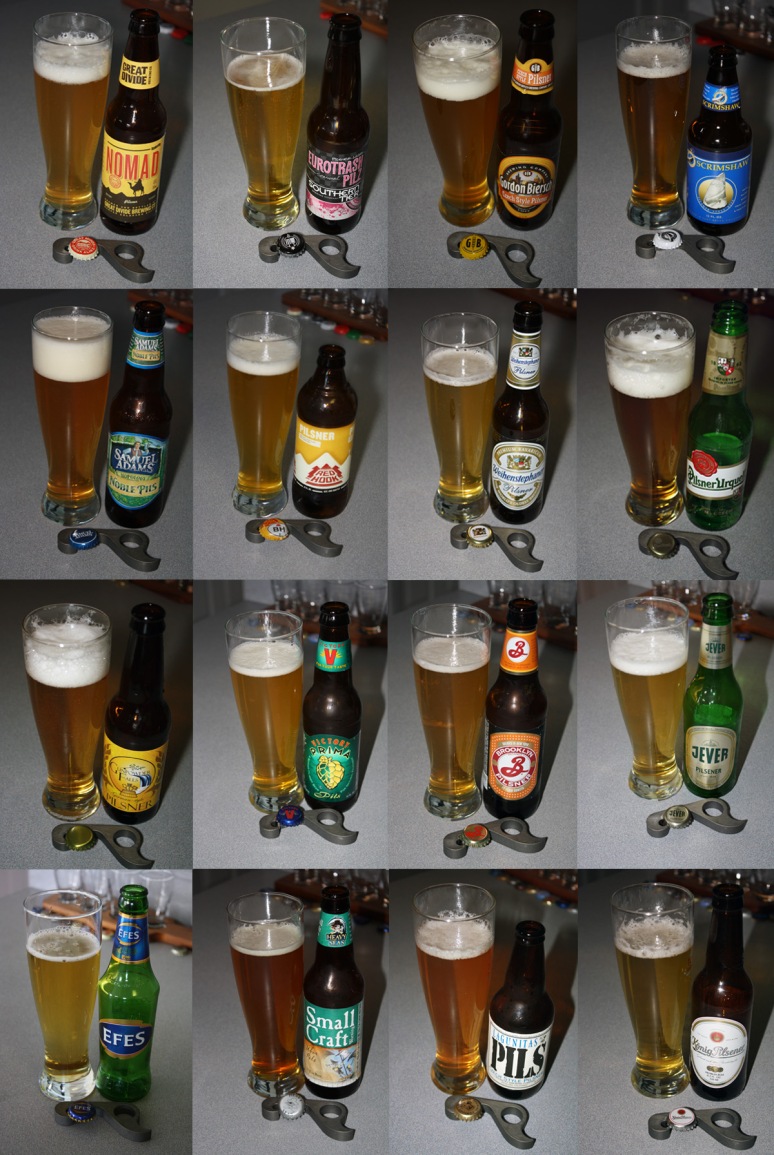