A challenge arose on Twitter. I accepted. I present to you a review of a beer using no adjectives. I will try not to have clauses or phrases with adjectives, either. Articles, fragments, intensifiers, nominatives, prepositions, interjections, summatives, resumptives, appositives, and adverbs remain.

Victory, of Pennsylvania, brews. They mash and whirl and ferment beer, beer destined for mouths of the proud. Of the beers they brew, Summer Love stands a monument. A bottle of freshness, replete with flavor, the summer distilled. When the cap pops, the season starts. Available come Spring, but gone by Fall. You think it a lager, but it esters an ale.

A player swings a bat on the label. The sun rises, rays from a ball, as if sport defines the onset of fun. But not fun, romance. Love. Baseball. Pastels decorate the remainder, outside a block of letters cheering the name. The beer begs a hand, your hand obliges.

The cap contains a rumble of carbons. Cerulean in a circle. The beer slips from the bottle like the Yangtze. Dandelion diffused. Bubbles burp a bouquet; spice in hops – Tettnang, Simcoe, and Citra says Google. In a dune aromas settle. Your tongue pelted by UV-rays. The sun captured and served.

The beer lilts, but the song lacks crescendo. Even with the bright, it lacks layers. Complexity crashes on the backend, leaving tongues wanting. But one can’t detract for aspects out of style; for what it represents, Summer Love taste like drinking gold. IPA-ubiquity shelved to make way for a grandfather of sessions. Five point two percent.

You drink this when the heat reds necks. You slug this to mimic bat meeting ball. You mellow on this as night creeps in on the melody of crickets. Victory hits a homerun.

(Grammarian’s note: this is harder than it might seem at first. You cannot use any intransitive verbs [including any form of “to be”] as the subject complement coming after an intransitive is always an adjective. That leaves you with three types of sentences: 1) S -> V -> DO; 2) S-V; 3) S-V-IO-DO. Without introductory or supporting adjectival phrases, you have heavily rely on prepositional and nominative phrases, or adverbial flair to keep the sentence patterns fresh.)

No adjectives here, either

Local beer-buddy Doug Smiley of Baltimore Bistros and Beer is hosting the 85th iteration of The Session. The topic: Why do you drink? I got a bit experimental with the syntax, but screw it, it’s a party.

The party is stagnant. Four new roommates stand in a crude circle. Their friends stand in divided groups, like a middle school dance. Small talk, weather, work is all anyone can muster. There was a time, earlier in the week, when everyone thought this was a good idea. The bowl of pretzels seems to be the most lively member of the gathering.

Poppy lyrics drift in from a lonely backroom stereo. Quiet, but audible enough, a soundtrack to a mistake. Faces stare at screens instead of each other. Excuses form; doors are eyed. An awkward laugh trails off before the echo of a bad joke.

But above the social lullaby a cork schlunks free like a single shot fired from starter’s sidearm. The rest of the band joins in, hissing, and glugging, and clinking hellos. Door knocks and six packs find their way in, and suddenly regret seems hasty.

Each sip or chug finds a mate with a boisterous laugh, and together they dance through conversations. A board game bursts to life with rolling dice, doing its best to keep pace with the shuffling of several decks of cards. It’s hard to track rounds when everyone starts drinking at different times, but bottles begin to pile up on counter tops, the lacing and puddles left on and in glasses the only sign the drink had ever been there in the first place.

A woman shouts out the lyrics to her favorite song, now blasting from the stereo that was surreptitiously turned up, turning the din into a unified chorus, singing perfectly in time with You Give Love a Bad Name. Shot through the heart, her boyfriend retreats to his shot slamming friends, licking his wounds right after he licks some salt and sucks a lime. Everyone winces and agrees shots are a bad idea, but in a perfectly little golden row the boozy cylinders line up anyway, revving the engine of the party to red line: 8000 RPM.

Right about now, unwanted guests crash the party; a petty conversation about Karen (that bitch), an argument that doesn’t need to happen in public (or at all), a unsettled stomach that didn’t eat dinner (and probably should have). The alcohol has loosed the lips, sinking social ships, drinking guarded sips, thinking in vitreous hollow tips. But through the noisy fog of camaraderie these voices don’t stand a chance, squelched and squashed at the first reminder that this is a party, after all, so take it easy and have some fun.

Behind these guests come the uninvited but not unwelcome, the intellectual discussions made hilarious by the participants forgetting what they’re talking about or slurring their sesquipedalian attempts to weave in jargon, to stay on theme, to stay on topic, to appear, in their group, the wisest and most learned of the ones who’ve maybe had just one too many. After each takes turns debating, countering, after logic fails because of liquid luxury, after the flow hasn’t followed it’s original path, Hemingway and Joyce and Kerouac make appearances, if not in literal literary allusion, then as muses and features or reasons for drinking, focus of cheer, celebrations of those greats who maybe, at some point, stood just as they stand, in a little clump, throwing out interjections through the haze of bourbon and beer.

The buzz of energy is palpable but lost behind the buzz of everyone else, the singing and talking and woohooing in the kitchen like a train has pulled in for dinner, blasted it’s arrival through steam whistle, unloaded it’s already liquored-up guests for a nightcap. Some have already re-boarded their rail cars, making for spinning rooms and welcome beds, but others persist and drink despite the whimpers of “but…” or cries of “no!” from their stomachs, brains, significant others, livers.

In twilight’s long late shadow, it’s hard to tell which reality is tangible, who people are, or if they are, when sober or drunk, which world is the one you belong in, here, now, then, there. In those nights when time seems just as immovable as it does fluid, when your senses have all but turned to blur and dust, your hand may brush something only recognizable in the flashes of supersight that come in dream, and your soul may ever so briefly – like a blue flash of static on a winters day – touch the infinite, the universe beyond our electromagnetic spectrum, the ever pulsing afterlife that so many, for so long, have sought to find, define, and bound in books of canonized scripture, that you managed, somehow through the guise of good times and good company, to find in the carbonation that bubbles ever upward, angelically effervescent.

So why do I drink? I guess I’m just like the chicken, really. I want to, however briefly, see what’s on the other side.

(Author’s note: I recognize that romanticizing drinking can downplay many of the realities of alcoholism. It’s easy – or convenient – when you work and spend time in an alcohol-related field, to ignore the pink elephant in the room. Alcohol dependence and addiction can pose a serious risk to life, health, and happiness. If you or someone you know is struggling with alcohol, there are many options available, and absolutely no shame in asking for support.) 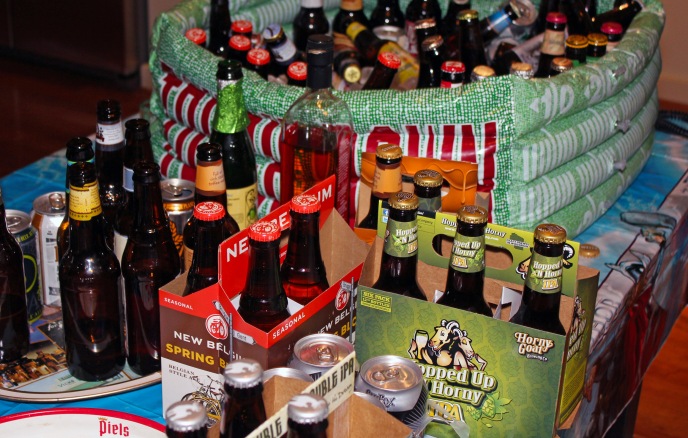 I’m not going to talk about Charlie Brown, so if that’s what you’re expecting, Peanuts to you.

In preparation for my own mad experiment, I had to do a lot of field research. This involved spending a lot of money on a lot of different pumpkin ales in an attempt to find the perfect harmony of hops and spice and pumpkin and bring it to life in the bubbling fermentation bucket of my imagination.

P.S. I kegged it this weekend. It’s alive! And all that.

Smuttynose Pumpkin is heavy on the bittering hops, which detracts from the overall pumpkinoscity. Wolaver’s Organic Pumpkin Ale is tasty, but finishes off more like a malty brown ale with only tiny residual pumpkiny bits left to slide around your palette. Shock Top Pumpkin Wheat and my beloved Harpoon UFO Pumpkin come off as too light, nearly tasteless compared to their full bodied breatheren. Oddly enough, the best pumpkin flavor I found was in Woodchuck Pumpkin cider (I know, WTF), but I still can’t decide if the taste seems artificial when paired with cloyingly sweet apple cider.

And little to my surprise, sitting on the top of the discard remains of my research sits Dogfish Head Punkin Ale. The stuff is just stupidly good. I’m serious. I get stupid(er) when drinking it. Even stupider than when I normally drink large amounts of beer on an empty stomach over a short period of time while trying to do my homework that is due in 18 hours.

Not that that sort of thing happens often.

But just as I was about to crown Dogfish Head the undisputed champion of my Fall drinking habit, Heavy Seas – The Great Pumpkin steps in, punching me straight in the jaw with a right jab of deliciousness. I’m usually wary of anything with the word “Imperial” in front of it (porter, IPA, storm troopers) because of the implications of such a specifically applied word. Imperial usually means sweet, strong, high ABV, higher than normal “fall out of your chair” count. It has always symbolically stood for the opposite of why I drink beer, standing in bold opposition to refreshment and crispness.

Heavy Seas has proven me wrong. The Imperial Pumpkin Ale that is “The Great Pumpkin” is, excuse the empty word, amazing. Perhaps the sweet spiciness of pumpkin ale as a style lends itself to the Empire. I don’t know, I’m not from a galaxy far far away.

But I do know that this beer does everything right. Unlike Imperial pilsners, it pours with a small white head that fires cinnamon and nutmeg aromas up your nose if you get too close. It is a brownish gold, like the top of a perfectly baked apple turnover. It smells sweet and buttery, as if someone stuck an entire pumpkin pie – crust and vanilla ice cream included – into a Blendtec blender and left it on “eviscerate” for 10 to 12 hours.

Will it blend? Hell yea it will blend.

The result is a beer that may actually be the physical embodiment of the whole season. Deep inside of each sip you can see the leaves changing color, hear your family bickering over who gets lights versus dark meat, smell the wood smoke of freshly lit fires on a cold October evening. It is the best Pumpkin Ale (that I have tried) in the WORLD.

Sorry DFH, you had a good run. I still love you though. Now, come in slightly cheaper six packs and we may be able to rekindle this love affair. Until then, HS: TGP is my gal. 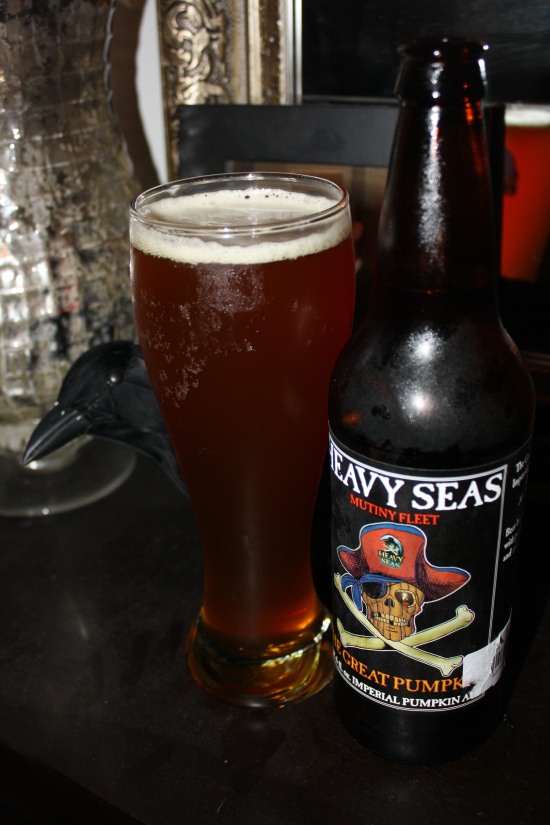