I wanted to write Thanksgiving beer post, but everyone already beat me to the “10 Beers to Pair with Turkey” idea and Stan had the satire down pat, so I figured I’d skip adding to the pile of festively uninspired listicles.

Besides, Thanksgiving never quite felt like my holiday. It felt like a day we cooked a huge bird as a meal because we were supposed to, because we didn’t have school or work, because everyone else was doing it, and it was weird to say, “oh no, we don’t do Thanksgiving” like some kind of horrible emotionless alien. As an expat you learn to adapt and blend in where you can, which means adopting the traditions and customs of your new land, even if they include bizarre things like pumpkin flavored beers and coffees. As we’d inevitably celebrate – sometimes with American friends, sometimes with our English-playing-American family unit – I came to realize that the food was just a catalyst, cranberry- and gravy-based lubrication for a mental moment of acknowledging and appreciating who you are, who you love, and who loves you, too. To give thanks is universal, a human default. Thanksgiving is just an end of November conduit for channeling the human spirit.

I leap-frogged off of Bryan (with a pass through Spin Sucks) and decided to mash my calloused writing nubs against the keyboard to express my own thanks. Much like I don’t need Valentine’s day to show my love, I don’t need Thanksgiving to give my thanks, because I actively try to do it everyday, in little ways. That said, a special spiritual power resides deep in the booming caverns of directly and purposefully saying “thank you.”

The original assignment was to write down all the things you were thankful for in 10-minutes, but since I have a mortal fear of counting down clocks from years of playing Nintendo, I’m just going to keep writing until my brain says, “OK, that looks pretty good.” I was never very good with rules, anyway.

So, in no particular order of favoritism, nor intentional slight from accidentally leaving someone out, I am thankful for:

Some other friends have played along too! If you decide to join in, shoot me a link, and I’ll add you below: 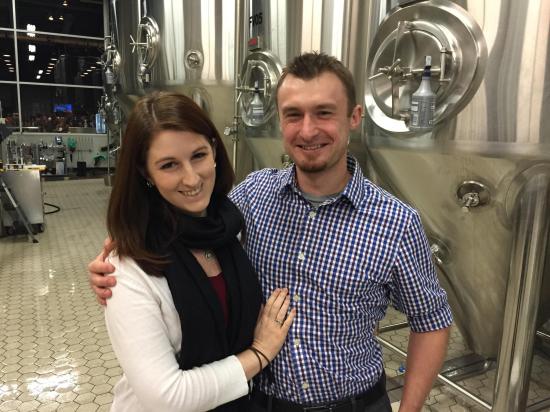 I am thankful she’ll pose for me in the waft of yeast, in front of stainless, and still have that beautiful smile.

Using a single word as a starting point, this collaborative series of posts by Mid-Atlantic bloggers focuses on passing down some friendly advice to those now entering the beerish order, those who joined a while ago but found their campus orientation lacking, or those who want to join, but don’t know where to sign up. Doug kicked the whole thing off with “craft” and Jake followed up with “patience.” After my jaunt comes Andrew of Das Ale House.

“Quixotic” tilts across the spinning windmills of my mind when I think about a word to describe beer these days. We’ve got self-named evangelists running, tweeting, and drinking all over, and the romance, oh man the romance – all the loin quivers and breathless sighs – runs deep and hungry in this love affair with brew. But no, my love for Cervantes aside, I’m looking for a word of advice here. I considered “identity” briefly, as a warning to not let a drink-based subculture become representative of your entire psyche, but that, too, doesn’t guide so much as it does deter.

The word I’m going to offer might seem obvious, self-serving. It’s always been there, since yeast first found some barley to munch, but I feel it’s been lost a little bit in the swelling seas of industry growth and bottle-shop choice.

When I first submersed myself into this whole beer thing, I was near obsessed with the product. How it was brewed, where it was brewed, who came up with the recipe, why, exactly, it tasted so damn good. I spent a long, long time scrutinizing the container and its contents, the make up of the ounces, the delicate balance of chemistry and nature that makes beer magical. It made sense to me then, to focus my energy on filling the gaps that existed between me and the glass, as if the purist pursuit in the brewing game is to learn and retain every possible piece of beer-centric information.

Obviously, unless you’re trying to be a walking Oxford Companion, this isn’t the best approach. You don’t need to know thing one about hops or malts to know you enjoy beer, but like I said in a recent post, the culture seems to push you that way. If you don’t at least try to brush up on styles and brewing practices you might be left behind, inadvertently embarrassed, made to seem like the rookie in the room even if you’d tasted more beers than Michael Jackson himself. It’s easy when you add cultural pressure to a steep learning curve to get lost in a swirling maelstrom of wort and fermentation and tasting, where the only thing that matters is you, and your beer.

I’m here to tell you to avoid that at all costs. You can have all the personal love for beer you want. I encourage you, if you’re so interested, to learn as much about beer as will fit into your brainmeat. But remember: long before our current American renaissance, beer was a communal drink, enjoyed by the pint in pubs all over England, Ireland, Scotland and Wales, by the boot in the Bier gardens of Bavaria, by the barrel in the quiet cloisters of Belgian monasteries. Beer pours from the tap bubbling and social; it wants, if not demands to be consumed with company.

What defines a “friend” has changed pretty dramatically with the help of the internet. I’ve come to call several people I barely know “in real life” some of my closest mates. Some I’ve only met a time or two. Others I’ve never met outside of the confines of some HTML and CSS. The internet is like a giant tap-room, open 24-hours, where one of your buddies, somewhere in the world, is almost certainly nestled up to the timbers, trying out your local brewery’s newest offering. With the help of Twitter, Untappd, Facebook, and all the other selfie-social-solipsistic networks, we can cheer, prost, and slàinte like never before. It still doesn’t come near to replacing the real thing – the tangible glass in hand and sharp clink of a toast – but it certainly made the bar bigger.

I suggest that you use this incredible expansion of our world to reciprocate. If someone buys the first round, you buy the second. If someone reaches out in a friendly way, reach back. If someone asks for help, help if you can. Share. Trade. Commune. Be. Don’t worry about who has done what for who, or what brewery is on the shitlist for whatever reason, just go reciprocate your love for the beer by drinking it with other people.

I think the current state of beer writing reflects this need. If you flip to the Food Network, you’ll notice that every show – even ones with a focus on quirky places – include people. Anthony Bourdain constantly talks to locals to get the history and story of his meals. He reciprocates his passion out into the world, and he’s successful as a result.

Don’t drink beer in a vacuum. Remember all the people that made it possible, all the tales you could swap with others enjoying that same beer, at this exact moment. Be excited by the people, not just the product.

Don’t drink the whole sampler flight by yourself, share it with the guy next to you.

It’s pretty easy to forge connections nowadays, what with the Twitter, the Book of Faces, the blogs, and the beer checking-in apps. We’re all one #beerchat or reblog or status message away from becoming besties with our new internet friends.

I played World of Warcraft for years in college, partly as a way to avoid doing homework, partly because it was the perfect way to stay in touch with my geographically scattered friends. I could easily hang out with a buddy in Chicago, another in Ann Arbor, another in Harrisonburg, all at the same time, without missing class or spending hundreds of dollars on gas. The internet is the perfect social tool for the chronically lazy.

But I made lots of friends that I hadn’t known offline, and never did meet in person. Even though I never shook the hands connected to those avatars or gave them a big platonic hugs, I consider them legitimate, real friends. I may be part of the first generation to be able to say that; the first generation to master the concept first inked by letter writing pen-pals by adding pictures and video to the conversation.

While those relationships founded on coordinating tweets are great and easy to maintain, the in-person experience of sharing a pint should always be the goal. We’re still mostly human after all, so until the machines replace our brains with circuit boards, nothing will beat that first clink of glasses, that first slurp of suds, that first mutual “ah!” of refreshment.

I had the joy of finally meeting two of my internet friends last Friday. Glasses up to Bryan and Josh; to everyone else out there I have yet to toast, all I can say is: soon.

I’ll let the pictures do the rest of the talking. 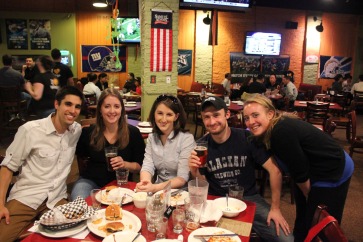 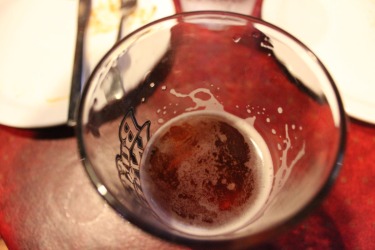 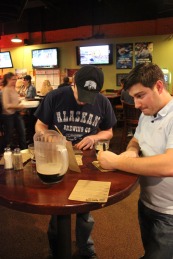 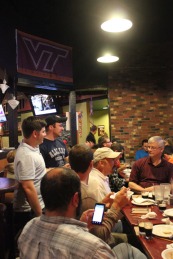