Have you ever been reading a book when, without warning or reason, your brain wanders off onto some random idea (like tacos!)? Have you ever looked back over the pages you just “read” and realized that you didn’t actually read them at all, they just kind of passed by your eyes like a slow moving cloud?

The culprit, for once, may not be your underdeveloped attention span or lack of sleep.

The problem might be in the syntax of the writing.

Despite our contemporary attempts at universal equality, not all sentences are created equal. Some are stronger than others, or are innately more interesting to read. In standard prose there are three types of sentences:

These sentences determine how subordinate information is provided to the main clause of the sentence, and determines the syntactic variety of our writing. If you want your writing to dance on the page, put on that tutu and really nail that Tchaikovsky, you have to understand what each type of sentence does, and why.

The right-branching sentence is a writer’s comfort sentence. It’s fried chicken and mashed potatoes. It’s that favorite pair of jeans that you refuse to wash because you know when you do, they won’t fit the same. It’s our default syntactic form, and the one you’re most likely to encounter in everyday reading.

It’s also the first kind of sentence that English speakers learn to write. A typical right-branching sentence looks like this: “He ran to get to the sword on the other side of the room, hoping to reach it before the swashbuckling goat-man.”

The basic sentence is just subject + transitive verb + direct object, “He ran to get the sword.” The other “stuff” (call it whatever you want: subordinate information, embroidery, a fancy tie for your sentence-suit) comes after – or to the right of – the subject of the sentence.

This is the journalist’s preferred style, as it gives all of the information in a clear, often chronologically appropriate order, without the reader having to figure much out.

The right-branching sentence is great for delivering information quickly and cleanly.

Imagine reading a long-form piece that was written with all right-branching sentences: “He ran to the store to get milk his sister desperately needed. He had no money, but that wouldn’t stop him. The milk was in the back of the store, so he had to pass the clerk to get to it. The clerk watched him closely, hoping he wouldn’t steal anything. He picked up the milk and ran out the door before the clerk could even yell in protest.”

Not terrible, but it sounds pretty choppy. All of that adjectival and adverbial supplementation dangles off the end of the predicate like a poorly attached fishing lure on some thin, cheap line. One big fish (or good reader) and that tackle is lost forever, claimed by the briny depths (of your recycling bin).

Fortunately, most writers recognize that writing like a third-grader isn’t the best way to get an idea across, and use (even if they’re not aware of it) another type of sentence to vary the patterns and cadence of their writing.

If the right branching sentence is your comfort sentence, the left branching sentence is that tumultuous but exciting relationship you had in your early twenties. Mysterious and fascinating, packed with new experiences, something you couldn’t help but be attracted to, even if only for the novelty of something different. But with excitement comes risk. The left-branching sentence can leave you pretty burned and bitter when it dumps you for a guy named Steve who totally isn’t as smart or successful or as good looking as you.

A left branching is exactly what it sounds like: the embroidery of your sentence comes before – or to the left of – your main subject and predicate. It is very good at building tension, or front-loading a sentence with information that you as the writer feels the reader needs before he gets to the action of the sentence.

This is a great for for dramatic moments, where you want to drag out some emotional scene, or build-up to a specific, powerful realization.

It’s also great for pissing your reader off.

There’s little worse than a sentence that just won’t get to the point, and that’s the risk you run every time you write a left branching sentence: “In the fading light, under the mossy ruins of a fallen willow, hoping against hope that she would show up dressed in that red sundress that hugged her curves, praying he wouldn’t fumble as he reached for the ring in his pocket, Jason sat.”

Shit man, Oscar Wilde called, and even he’s bored. Get on with it. Building tension is one thing. Rambling for five adverbial phrases is another.

The left-brancher can be a great cog in the steam-powered mechanization of your writing, but writer beware. It should be used sparingly and with purpose. If not, it may alienate writers and muddle up your voice, leaving you sad and alone on your birthday even though she promised to hang out and watch Spaceballs with you.

Middle-branching (aka Mr. Fear of Commitment)

The middle-branching sentence is living through a perpetual identity crisis. Sometimes it wants to be left-branching, sometimes right-branching, which leaves it stuck in the middle, waffling and confusing everyone. It can’t figure out where to drop all that heavy subordinate information, so it just gives up, drops it at its feet, and stomps away in a fuss.

The middle-brancher places subordinate information between – or, um, in between – the subject and predicate. This makes for some interesting appositives or adjectival phrases that make your sentences more interesting.

Or more awkward. It depends on the style or effect you’re going for.

A middle-brancher would sound like this, “He drove, filled with shame and self-loathing, to Walmart.”

A lot of editors might immediately want to “correct” these sentences and make them left- or right-branching, but in defense of all things artistic, they can be used to vary the flow of a piece, and present important information in a way the actively engages the reader. If you’ve already introduced your subject, immediately following up with adverbial or adjectival information is a way to place emphasis without having to add a ton of supporting words that scream, “pay attention to this part right here, it’s super duper important, for real!”

The middle-branching sentence relies heavily on restrictive and non-restrictive clauses. If you really need to qualify how or why your subject did something (to say, build character, establish setting, or foreshadow) the middle-branching sentence might be exactly what you need. If the clause you’re placing in the middle is non-restrictive and just adds some other sundry detail for spice, left or right branching might be more appropriate.

Syntactic exploration is the cardamom and curry powder of writing

Next time you’re writing (or editing!), pay attention to the style of sentences you’ve used. Is it heavy on the right-branchers because you were a little too comfortable with your language when you wrote the first draft? Is it packed with tedious left branchers because you drank too much and started remember all the times you and ::named redacted:: went to the movies in 2001? Is it full of weird, lurching, awkward pariahs of language that dawdle about in the middle for too long?

If so, change it up. Any type of sentence can be transformed into another type with some clever grammar Feng Shui. When you review your own work, pay attention to the syntax just as much as the content and word choice. A little variation or emphasis passed on through the proper sentence structures can take your writing from “yea, I’ll read this” to “holy shit I can’t put this down.” 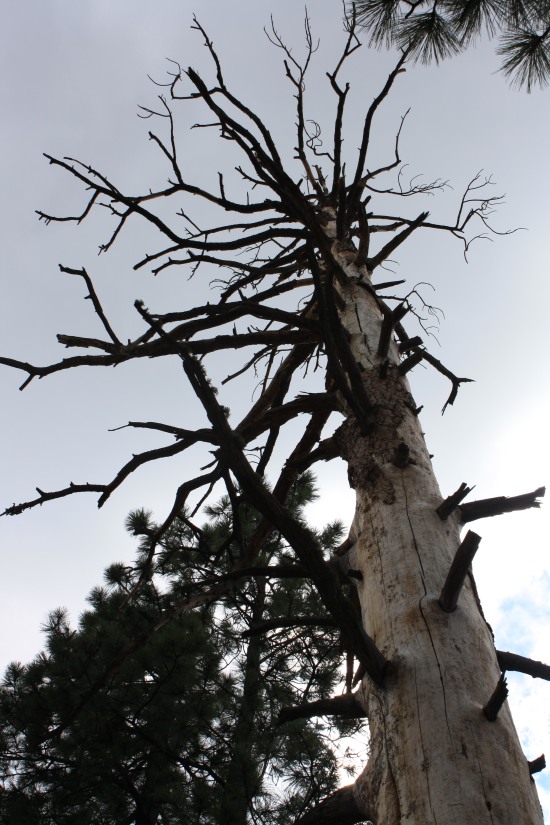 “Superfluous branches we lop away that bearing boughs may live” -Shakespeare