There are few things that simultaneously sting and soothe as much as sorting through the assorted material detritus of someone’s life. All the papers, the scribbles, the notes left hanging in the pulpy ether, inken echoes of a person’s voice on every leaf. Even the things that don’t bare their literal mark carry grainy nostalgic gravitas, reminders of how that person drove down the highways of time, what prosaic hour-fillers caused a traffic jam of commitment and desire in those relatively few moments we’re blessed with consciousness.

I was helping my mom with some simple jobs at her house, changing a light bulb here, replacing a battery there, organizing her transition into fiduciary executorship even farther over there. After I’d gotten the smoke detectors to screech their new battery announcement through the whole house, she asked if I’d take a look at a box in the garage. A box filled with wine.

I expected to find some store-bought merlots and cabernets, maybe some of the proverbial “good stuff” that my dad had hoarded away as an apocalyptic just-in-case. She pointed me to the decaying ruins of a red and white cardboard cube with eight emerald bottles sticking out like prairie dogs viewing the plain from the safety of their holey home. The bottles looked familiar, but distant, that friend from elementary school whose face changed just enough from the evolution out of childhood and into adulthood that you only recognize them after a few minutes of guarded, remote study. I knew these bottles at one time, maybe even filled them and corked them, but couldn’t triangulate when, or why, or how.

They were unlabeled (the hallmark of Gray family breweries), covered in silky webs and solid dust, and gave no hint of their contents. My dad had been as eccentric in his brewing as he had in the rest of his life: there was equal chance this was carrot wine, rhubarb wine, banana wine, or possibly even sour apple.

The only way to find out was to pierce the cork with silver spiral.

As the soft cylinder popped out, I was hit with oakey, odd aromas. Out of the bottle it was brandy-brown, liquefied caramel, chicken gravy made from homemade stock. Syrupy legs slipped their glassy nylons, slithering seductive and sexy. This was no normal wine. Suddenly, as woody wonder hit my tongue, I remembered.

When my parents moved out of and sold my childhood home, my dad had found a carboy deep in the under-stair recesses of the basement. The airlock was Sahara dry, and we assumed the six or so gallons was lost to oxidation and history. He had no idea what it was, or why he’d forgotten about it, so before we poured it out on Dionysus’s grave, we sampled it. Turns out he’d made sherry. Possibly accidentally. Accidental sherry that had aged for five plus years in quiet, unmolested darkness.

I helped him bottle it, and just like he had, let its existence slip the fetters of my memory. By the time I found it, it had lived another five peaceful years, watching, waiting.

To sip a ten year old sherry, made by your father’s hand, is to reconnect to the way he spent his time. It’s his last vintage, the final fading fermentation of a life that reached full attenuation months ago. And now it’s all mine, salvaged from a dusty garage, plucked from my memory, planted in front of me to raise in cheers of life gone and life yet to live. 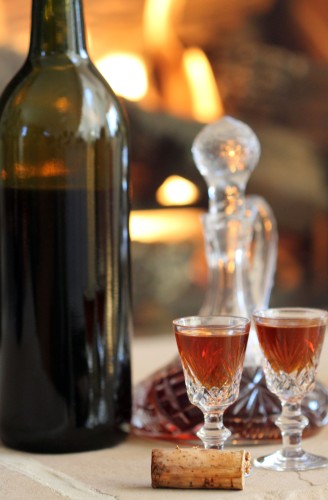 My dad’s decade old sherry in my grandma’s (his mom’s) century old decanter.