If I shoved you through the doors of a commercial brewery and said, “make some beer!” would you have any idea where to start? Would you be overwhelmed by the towering shiny metal of the brew kettles? Would the verdant pounds of hops intoxicate you with their heaven-scented mystery? Would you try to make a beer, even if you didn’t really know the process or how to use the equipment? And if you did, how good do you think the beer would be?

Now, imagine I did the same thing, but you’d been homebrewing for a few years. You may not have experience with the tools and ingredients on such a large scale, but you’d at least understand how beer works. You’d know that you needed to crack the grains and get them sparging, as the wort is the soup stock of your new brew. You’d know that you needed to decide what and how many hops to use for bittering, and then which to add later in the boil for aroma. You’d have a much better understanding of what was going on, and there’d be a chance you’d make a beer that people actually wanted to drink.

If I shoved you into a chair in front of a computer and said, “write a novel!” would you have any idea where to start?

Now, imagine I did the same thing but you’d been writing short stories for a few years.

It’s our nature to think big

I think if you’re dreaming at all, you’re dreaming big. You’re thinking of all the wonderful splendor that your potential might manifest as: riveting novels, acclaimed works of nonfiction, successful innovative breweries, a work environment where flip flops are not a faux pas, but a deliberate and encouraged style choice.

And as a direct result of thinking big, we act big. We draft huge plans for ourselves, for our careers, for our lives, even if those drafts are little more than theoretical scribbles on a post-happy hour cocktail napkin. We imagine our lives as they could be, filling in the holes with success shaped ideas. There is a certain pleasure in being wrapped in the warm, down blanket of future-thinking fantasy.

So we try, from the onset, to do big things. Writers try to go from zero to epic SciFi space drama, homebrewers try a Flemish Red for their very first beer. We aim high, probably too high, because the challenge and wonder of something new drives us. We get drunk on our own potential, our own dreams of what we can accomplish.

But when expectation falls short of reality and our dreams run out of gas 10 miles before the next Wawa, we feel disappointment. We’re confused as to why our novel reads like a Jarlsberg hunk of plot holes, why our beer tastes like band aids and dirt.

But our nature is also cumulative

There is a reason we don’t teach children to read by handing them a copy of Anna Karenina and saying, “good luck, kid.” We have to build our skill sets a bit at a time; win a ton of minor educational battles to win the knowledge war. You’d never expect a surgeon to be able to remove a tumor on her first try, with no experience except some stuff she saw on YouTube. So why do we expect to be able to write full length books with little or no training?

I’m certain there are some people out there who are an exception to this rule, who can, almost by magic (or raw talent) drop out a novel on their first try that is of ridiculously high quality. But for most of us (me included) that’s just not how it works. As much as we want to be the exception, the one who finds the genie bottle, the one who wins the lottery, chances are we’re not going to. We’re those unlucky saps who have to do all those labor intensive things like study and practice.

When we practice, we could keep aiming very high, firing that cannon at all those stars, hoping against hope that we might hit one. Or we could be a bit more realistic and aim for something a few thousand light years closer.

If you want to brew beer that sells, start by homebrewing. Start with simple recipes, so you can learn what makes good, tasty beer, regardless of the ingredients or equipment.

If you want to write books that sell, start writing short stories. Start with single characters and tight narrative arcs with a focus on sentence structure, grammar, and tension.

Because smaller is easier to digest, break apart, experiment with. A five gallon batch is a good sample size to test what kinds of hops to use (and in what combination) or how a certain temperature during mash can affect a finished beer. A short story is a perfect place to try a new setting or structure or kind of dialogue.

Instead of committing a ton of time and resources to something you’re not sure will work, try it on a smaller scale first. If you nail it, awesome; you’ve learned how it works, and can always scale it up. If it didn’t turn out so well, even more important lesson learned.

Starting small let’s your practice your art on your own time, by your own rules. 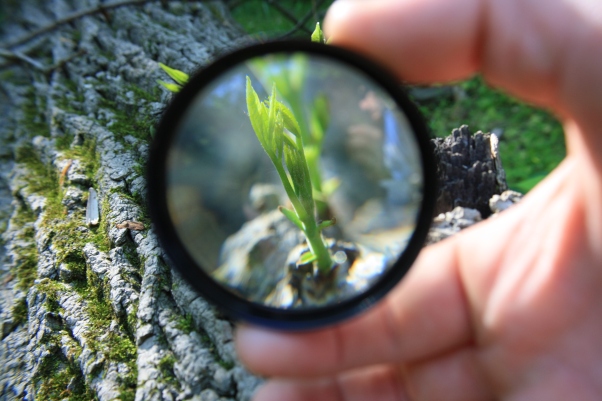 “Anyone who doesn’t take truth seriously in small matters cannot be trusted in large ones either.” -Albert Einstein

In between the blur of beer and video games of my sophomore year of undergrad, I started writing a novel. I thought, in typical 20-year-old fashion, that I had learned enough about life and writing and had the requisite knowledge to write an entire book. I created an elaborate outline and starting clacking away at my little re-furbished Asus with literary abandon.

I thought the premise was brilliant: a young, misanthropic college student records the behavior of the undead (Jane Goodall style) in the midst of a zombie apocalypse. At the climax of the story his hubris leads to him getting bitten and he revisits his diary, making footnotes as he begins to slowly turn into one of the things he’d been hiding from/studying for an entire year.

But very quickly, because of my lack of any focus and real experience, the story degraded into nothing but random scenes and overly visceral descriptions of the reanimated dead. I wrote ~3000 words about the nuance of how flesh falls off of a zombie’s face, for some reason. 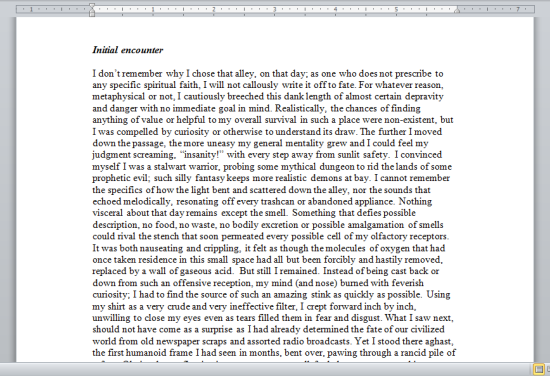 Wall of Text critically hits you for 90,000 damage. You die from boredom.

I got lost in a maze of wanting everything to be the best writing in the history of writing, throwing out stupidly complex vocabulary, piling on unnecessary details, and inserting random asides just because I thought they sounded great. I hadn’t learned any lessons about my own writing, so my voice was weak and dense and boring.

I was drawing from years of exposure to the zombie subculture, but doing very little creating of my own. Everything was a cliche; the way the virus spread, the way the zombies looked, sounded, and moved, my character’s motivations and assumptions about the world.

It had no dialogue. At all. The protagonist was an archetypal asshole. I couldn’t figure out how to transition between chapters, so I just didn’t.

This generic, boring tragedy went on for about 4 months. I stopped writing at about 41,000 words.

Until this morning, I hadn’t looked at that manuscript since the “Last Modified Date” (9/3/2007), because I was afraid of what I’d find. It’s ugly. Repulsive. A perfect collection of unforgivable mistakes and errors that sums up how terrible a writer I was, packed to the margins with my insecurities and collegiate arrogance.

But I refuse to delete it. It is awful and will exist in a perpetual state of editing, but it was my first attempt. My first-born. The first time I really committed to trying something outside of the familiar, the comfortable. This document is milestone zero on my journey to become a writer. To delete it would be a futile attempt to forget where I came from.

It is great to aim high. I’ll pretty much always suggest that someone aim as high as their imagination allows. Stretching and trying and growing is how you’ll improve, even if you don’t actually reach whatever goal you set.

But at the same time, be realistic. A musician doesn’t expect to write a number one hit every time he picks up his guitar, so don’t expect the Pulitzer for the essay or short story you jotted down after work. Practice and have confidence in your ideas, and you can’t help but improve.

If you pour yourself into your art, eventually the art will pour out of you.

The first big thing you ever write is an act of artistic puberty; an awkward time where you’re forced to experience all kinds of unpleasant things all for the sake of maturing. The acne will clear up. Your hormones will stop raging. Your voice will no longer crack at random, but be strong and consistent and uniquely yours.

As you continue to write, take some time to look back on your earliest work. Open up those NaNo novels in a few months (or even years). It’s amazing to see how far you’ve come, and gives you hope for all those miles you still have to go. 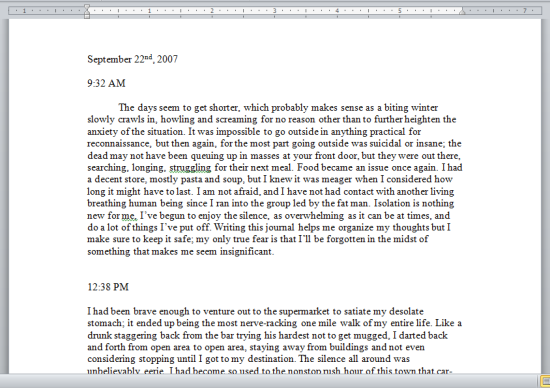 The entire thing reads like this. I am so sorry everyone.