This is a post I should have written almost exactly one year ago, but I got kind of distracted and wandered off into the land of Lego mini-figures and beer for a while.

But I’m back, and I’ve got photos for everyone! Since Experience PRS 2012 is happening this weekend, I thought it appropriate to look back on one of coolest events in my little life as of yet.

Last year, I was invited to an event that was basically tailor-made for someone like me; an Olivevent, if you will. My good friend and fellow musical enthusiast, Aldwyn, took me to Experience PRS; a guitar extravaganza hosted by Paul Reed Smith himself, at his factory in Stevensville, MD, that has music, beer, food, luthiers, and people with an odd fascination with types of wood all in one place.

A little background: Paul Reed Smith (and by extension his company) builds amazing guitars. They are gorgeous and intricate, and if I knew how to play the guitar much better than I do, and had the disposable income, I would buy one with very little reservation (I’m eagerly waiting  for them to have some commercially available mandolins). He’s also just a nice guy who has employed a lot of local people in his factory, and is so passionate about his work that it puts other manufacturers to shame. He’s like the Steve Jobs of the Guitar world, but much less pretentious and much more animated.

I met Aldwyn at his house and he offered to us across the Chesapeake to the bay-facing guitar birthplace. The weather wasn’t being very friendly, so we stopped and got an umbrella for me, who, being the kind of person I am, had forgotten his at home.

The drive wasn’t bad, and the rain held off as we stood in line to get our badges. Aldwyn is a long time fan of PRS guitars and owns quite a few of them, so he managed to get us in as “signature” guests. We got an extra bag of loot which I use as a gym bag to this day.

The event itself was setup just outside the factory; several large white tents covered food carts, beer carts, and guitar-related carts. The biggest tent in the center covered a huge stage, with about 300 seats in front of it. When we arrived, a group of musicians were on stage testing out the new acoustic PRS SE Angelus.

Yea, that’s Ricky Skaggs with the microphone, no big deal.

Note: Paul Reed Smith likes to give away guitars. By my count, he gave away 13 guitars at Experience PRS 2011. Four in a raffle, one to a long-time supporter, and a bunch others to people who answered company history questions correctly or won other events. I kept praying that my number would be called in the raffle. The guitars are so beautiful that I didn’t even care that I couldn’t play one to save my life.

For a PRS, I would learn.

It was a good thing those tents were there, because Monsoon season had set itself against the East coast, starting that day. It started raining, hard, and didn’t stop the entire time we were there. I grimaced for the poor technicians who were manning the sound booth and running cords (editor’s note: typed “chords” the firs time around) to the stage; it looks like a watery-electrical mess waiting to happen.

But despite the rain, the whole thing went quite smoothly. Announcers had to yell over the deafening roar of rain pounding the tent’s roof, but other than that, the weather was hardly noticeable. We sat and listened to some excellent guitarists for a while, waiting for the factory to open up so the day could really begin.

Walking into that factory was like passing into the fields of Elysium. The entire place was packed wall-to-wall with guitars; more than I could count, in myriad designs, colors, specifications, and sizes.

Please excuse the photo quality; my camera died RIGHT as I started taking pictures, so I used my old camera phone to take all the rest. 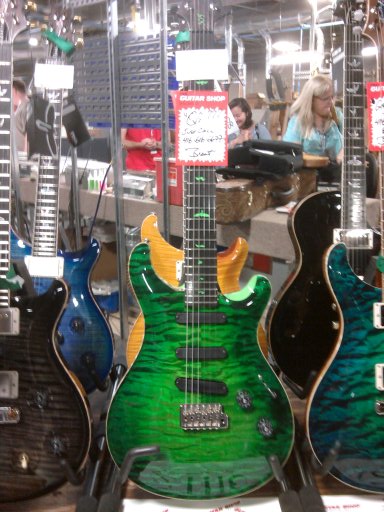 I really wanted this one to follow me home.

The entire workshop area was open to guests. I got to see every device and tool that goes into creating a perfect guitar, but also how much work and attention goes into each. PRS hold themselves to a very high standard, so each piece of tone wood is carefully selected and sanded/shaped by hand.

A luthier’s work is never done.

I wandered around with eyes glued to wood, admiring the quality of the cuts and the organization of the factory itself. Each station flowed naturally to the next, with order and logic that would satisfy even the most OCD addled brain. We moved from wood selection to sanding to carving to staining to clear coating to electrical to packing and shipping. To say it was glorious would be a unfair understatement. 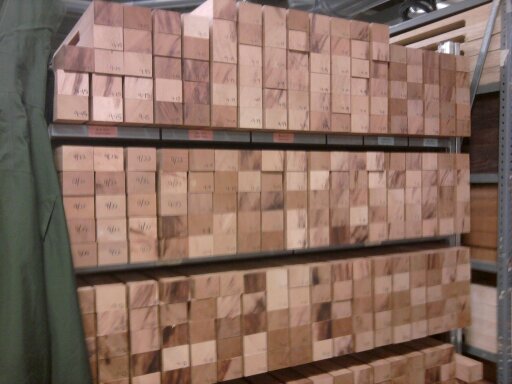 One day, all of these will be guitar necks. I know, awesome.

As awesome as the factory is/was, that wasn’t even the highlight of my trip. I knew Ricky Skaggs was there, and I was hell bent on meeting a man whose music I had listened to and admired for years. We wandered the huge area looking for him, asking Aldwyn’s friend if they’d “seen Ricky”, hoping to cross his path, shake his hand, and maybe have him sign the mandolin pick guard that I may or may not have intentionally brought just to have him sign.

We didn’t find him immediately, so we opted to use our “signature” privileges to meet Paul instead. The event staff had setup a time where we could meet him and get a picture, so we dutifully stood in line, umbrellas overhead, waiting for our chance to meet the brains and innovation behind the luster of the perfectly finished guitars.

I also had Paul sign my pick guard because it was all I had to be signed.

Despite being rushed and having to dodge the rain, Paul was an amazingly nice guy. He took the time to talk to me, and told me he’d love to make mandolins, but needs to get his acoustic guitar line launched first. He marveled over the pick guard I had him sign, noticing the tiny flecks of pearl in it as he held it up to the light. You could see his love for instrument aesthetics as he scrutinized this random piece of fiberglass and wood. I dared not tell him it was from a lowly Epiphone MM-50. He didn’t need to know that.

Aldywn and I wandered around the venue for a while, drinking Fordham Copperhead, continuing our Skaggs search. We always seemed to just miss him whenever we got to an area. The day was winding on, and I was losing hope. We walked away from the mechanical side of the factory, making our way into the “Private Stock” area, where wood and parts were kept for all of the made-to-order guitars.

Just as we passed Paul’s office (which has 7 or 8 guitars hanging on the wall above his desk) we turned a corner, and saw Ricky sitting on a couch by himself, jamming on a rosewood version of the new Angelus Acoustic. Apparently he was about to eat lunch, and was waiting for Paul and the rest of the crew to appear with some food.

I’ve never been called shy. I walked straight in and said hi, and expressed my admiration for his music and talents. When he shook my hand, I couldn’t believe how absolutely massive his hands were. How those things dance around the tiny fret board of a mandolin like they do, I’ll never know.

Ricky was awesome. He said he was glad to see another mandolin player in this “mess of guitarists” and signed my pick guard with a flourish. We sat with him for a good twenty minutes talking about acoustic anything and everything, until Paul’s entourage showed up and kicked us out, very politely. They were eating some super sloppy pulled-pork sandwiches, for anyone who cares.

The rest of the day was rainy, but awesome. We chatted with several vendors who were all subtly trying to sell guitars, and I’m amazed that Aldwyn didn’t buy one, based on how wide his eyes got every time he put one over his knee.

I’d love to go back again. Maybe after I’ve figured out how to play more than 6-7 chords and feel less like journalist and more like a guitarist.

A special thanks to Aldwyn, without who, I could never have gone, never taken these photos, never met Skaggs, never written this post, and never had these awesome memories. 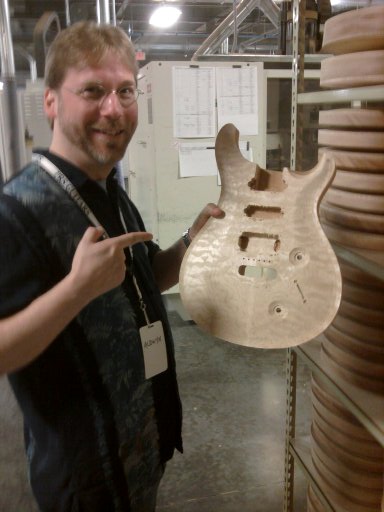 Bonus picture! How sexy is this? 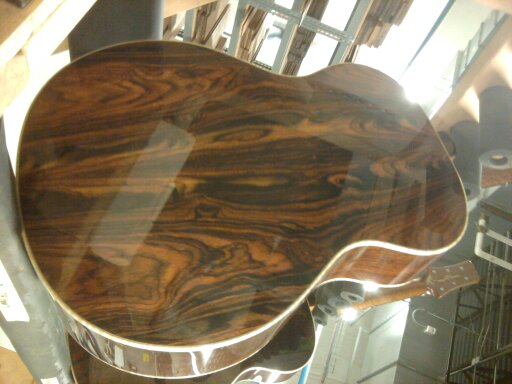 Macassar ebony, if I’m not mistaken.