From an outside perspective, brewing beer may seem pretty simple. Heat water, mash malt, boil wort, add hops, cool, pitch, wait, bottle. And to some extent that’s true. As the former owner of Anchor Brewing, Frederick Louis “Fritz” Maytag, said, “We brewers don’t make beer, we just get all the ingredients together and the beer makes itself.”

Our job is to make the wort. The microscopic chomping of the yeast does all the hard work. But within the simple verb and direct object of “make the wort” is a very large field of scientific study with lots of measurements and experiments and graduated cylinders containing many different colored liquids covering the full range of the SRM beer color spectrum.

My new series, Beerology, will ask questions about craft beer and then attempt to answer them using as much science as a guy who has an undergraduate degree in English can muster. I will attempt to be as academically rigorous as possible, but I apologize now to all the real scientists; I’m still working towards my honorary degrees in Hoplogy, Maltography, and Yeastometrics.

I’m sure a lot of these questions could be answered with some creative Google-voodoo, but that’s not the point. Science! And stuff! 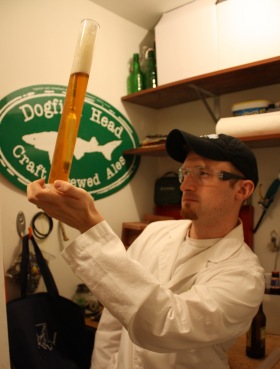 The Question: If a bottle somehow lost its label and all other defining marks, could the beer inside be correctly identified?

The Beer Babe asked this question a few weeks ago, and it got me wondering. How can we really identify beer? More importantly, what is the level of consistency between batches of the same beer? Maintaining the same exact recipe and correctly controlling all of the variables is one of the biggest challenges for homebrewers, especially those trying to continually reproduce the same beer over and over again.

While I would have loved to have analyzed the beer under an electron microscope and reported my findings about sugar length and alpha/beta amylase activity, I’m just a normal guy who lives in the suburbs. My “lab” is a tool closet in my basement. I had to get creative with how to test the consistency of these beers.

The Experiment: After excavating the deep, forgotten coolers and shelves of several nearby beer stores, I managed to find SA Boston Lager from two different production batches, as evidenced by the “Enjoy Before” dates:

I used two six-packs from the same group (to measure consistency within the same batch) and one from a different group (to measure consistency between different batches). We’ll call them “Control Group March” and “Control Group July” because that sounds really professional and sciencey. I know this isn’t the greatest sample size, but given the blog-budget (which is currently zero dollars), this was the best I could do.

Before I started, to eliminate any extra variables, I let all the beer warm to room temperature and then go (nearly) flat. I know, I’m so sorry. I feel dirty. I hope the beer gods can forgive me one day, for I only did what I did in the name of progress!

I did the crude taste test first. Each glass of Boston Lager tasted pretty much the same, except the version from Control Group March had a bit of a stale, old-french-fries twinge, which is to be expect from a lager that is nearly 4 months old. They all smelled roughly the same, except again, the beer from the older batch had a little more “been in your uncle’s basement too long” mustiness compared to the fresher stuff.

At a glance, they all appeared exactly the same, too. Same head retention, same color. The magic of Photoshop validates my eyesight too: all three glasses had the same approximate/average hex color (which is #863903 for anyone who wants to make a very true-to-life Sam Adams birthday collage for Jim Koch or something.) 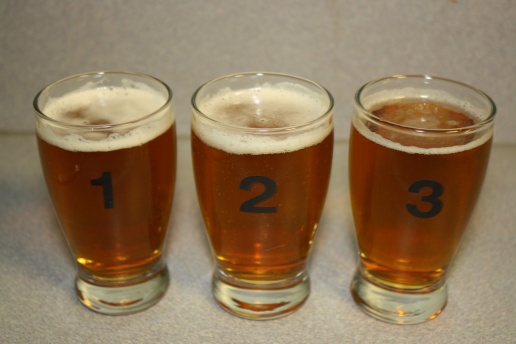 Because I’m bad at math, I poured the third one first. That’s why it has less of a head.

So far so good; you could in theory identify this beer with nothing more than your tongue, nose, and eyes. But let’s swim deeper into the sea of science.

I pulled out my fancy pH meter and began taking measurements:

There was a pretty wide variance in the level of pH from beer to beer in Control Group March. This surprised me, as I excepted, given the similarity in taste, that the pH would be nearly identical. The lowest measurement I took was 4.18, and the highest was 4.41. The average for the three groups was 4.3, 4.2, and 4.21; close enough to say that Boston Lager has a pretty stable final pH of something like 4.25.

As a point of reference, water is ~7, Coca-cola is ~3, and the inside of a normal human mouth is ~5.5-6.5. All of the measurements were still within the normal, healthy range of a lager (which can be anywhere from 3.8-4.5 depending on which chemist you ask or website you read) so it may just be that time in a bottle and location in the batch at bottling can cause fluctuations in the acidity of the final beer. The pH differences between the two July control groups were negligible.

I also tested the specific gravity, using my trusty old, fragile-as-hell hydrometer. If anyone wants to contribute to the “Oliver needs a refractometer and a high powered laser for reasons he won’t explain” fund, please shoot me an email. 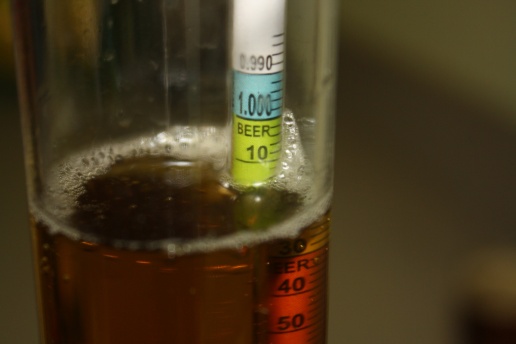 The results from the specific gravity tests were as consistent as an old, well cared for Toyota. I won’t even bore you with an analysis of the results. Let’s just say that if there were any differences, they were too minor for the gentle bobbing of a stick of glass in a tube of beer to measure.

The full spreadsheet of my test data can be found here.

The Conclusion: Commercially available craft beer is pretty damn consistent within batches and between batches, but age may cause some changes or instability. As long as you had a fresh example to compare against, you could identify a non-labeled, large-scale production beer based on the taste, smell, color, pH, and specific gravity alone. You wouldn’t even need any fancy sugar or “beer-DNA” analysis. I’m sure they’d corroborate my super scientific findings, though.

This probably only applies to beer that has been filtered and carefully controlled during brewing, meaning you’d have to throw all of this out the window when trying to identify a bottle conditioned or homebrewed beer.