The first side of the Pilsner Madness bracket finishes up with the world’s oldest brewery, Weihenstephaner, facing off against New York’s finest, Brooklyn Brewery.

Weihenstephaner Pilsner (7) – Weihenstephaner, a name I can never seem to spell correctly, has claimed to be the oldest continuously operated brewery in the whole world. With documentation regarding local Bavarian farmers paying hop-tithes (the best kind of tithes) to the Weihenstephan Abbey dating back to 768, it very possible that this is the oldest brewery still around. Weihenstephaner has a pretty extensive line-up (comparable to a lot of craft breweries in the US) including a Festbier, A Hefe-Dunkel, and even a non-alcoholic hefeweissbier!

Weihenstephaner also has a very well designed and highly navigable website that uses an animation of a beer glass being filled as its page loading indicator.

Brooklyn Pilsner (8) – My love affair with Brooklyn Brewery started with a simple pint of Pennant ’55 Ale. Since then I’ve sampled a lot of their suds, often satisfied, rarely disappointed. This brewery is 1219 years younger than Weihenstephaner, but that doesn’t mean it hasn’t done some great things since it was founded in 1987. Owners Steve Hindy and Tom Potter, encouraged by their success and love of beer, wrote a memoir/how to brewing book (titled Beer School) that details their experiences with starting their own brewery and all of the business challenges therein.

Brooklyn pilsner was brewed in a style reminiscent to the light golden beer that was preferred in New York prior to the prohibition. The recipe boasts two-row barely malt and both Perle and Hallertauer hops, making this a very faithful recreation of the classic German-style pilsner.

The young Brooklyn pours a beautiful pale yellow with a twinge of amber, echoing the orange of its label. The old Weihenstephaner pours a perfectly clear pilsner-yellow with no off color, almost like liquid gold in a glass. Both bubble and billow into a large head as they’re poured, but retain very slight lacing that sends very subtle hop notes up your nose as you bring glass to lips.

A pretty even match.

Brooklyn’s flavor is enviable. Clean, crisp, surprisingly complex for the style of beer. Despite the overall quality, it has a very subtle carbonation burn on the tongue and the hops tend to get lost in the malty aftertaste. Weihenstephaner, somehow, is even more enviable. There is almost no acidity and the hops find a perfect harmony with the malt, making for lip-smacking refreshment. I felt it was very slightly under hopped, but that may just be an issue of personal preference. I guess nearly 1300 years is enough time to really get the recipe down.

I really enjoyed Brooklyn’s pilsner, but I have to give this one to Weihenstephaner, just because of technical brewing prowess and pedigree.

The third match-up in round 1 has the far-Northern German Jever Pilsener trading blows with Washington state’s Redhook Pilsner.

Jever Pilsner (5) – Oddly, Jever (Friesisches Brauhaus zu Jever) was founded by a guy with the same last name as our previous winner: Diedrich König. This particular König started his brewery in 1848 (10 years before his…cousin?) and was a man-about-town, helping do awesome things like install the city’s first water supply system (presumably to brew better beer).

Apparently the König family really loved lager. This is a relatively hoppy offering that comes from the very far northern town of Jever, Germany. It is no frills and not fancy, but is crisp and almost perfectly balanced.

Redhook Pilsner (6) – Redhook was originally known for its ales (and it is officially called the Redhook Ale Brewery), so a lager – especially a pilsner – was quite a departure from their comfortable norm. Anyone who has had their ESB will understand why they chose a pilsner though; Redhook is clean and fresh like the forests it calls home in Woodville, Washington (the same hometown of Carl “Apollo Creed” Weathers).

Redhook stuck their toe into the shallow end of the pilsner pool in 2010 with their summer seasonal “Rope Swing Pilsner.” The water must have been warm enough for them, as they added the pilsner to the list of full year-round offerings (next to one of my favorite, Longhammer IPA). My research didn’t yield whether this is the same recipe, or a slightly altered version. Saaz hops and sweet grains, either way.

Redhook’s uniform is like nothing we’ve seen before. Points to them for being different, but this is a tournament of beer, not bottles. Pretty even playing field here: Jever has experience and practice on its side while Redhook has youthful energy and ambition. Redhook pours with a little more vigor and color, but Jever has a much nicer, slightly hoppy aroma that escapes as soon as you uncap.

Redhook is putting a lot of pressure on the veteran German, but he’s handling the defense deftly. Both beers can finish nicely, but Redhook’s defense looks a little weak. Jever comes up with big points after Redhook gets a red card for too much carbonation on the field. While the young brew put up a good fight, he ultimately couldn’t keep up with 165 years of tradition and mastery. Maybe next season. Jever 2, Redhook 1.

Jever Pilsner moves on to the quarters!

Next up in round 1 is the quintessential Pilsner Urquell verses one of the Rhineland’s best, König Pilsener.

Pilsner Urquell (3) – When someone says “pilsner” most casual beer drinkers immediately think of this clear, crisp lager, the first ever mass produced pilsner in the world (according to SABMiller’s marketing people). Its origins date back to 1842. While not hoppy at all compared to an American IPA, Urquell is pretty hoppy when compared other pilsners, thanks to the generous use of Saaz noble hops. SABMiller also claims that soft water and fire-brewing (heating the brew kettle directly with flames as opposed to heated water or some other heat source) add to the unique taste of Pilsner Urquell.

König Pilsener (4) – Theodor König was a pioneer, brewing bottom-fermenting lagers well before they were popular. Brewed in altbier style, nearly as old as its competitor, Konig Pilsener has been gracing the Beeck area of Duisburg with its perfect balance and deliciously pleasant finish since 1858. König is currently represented by German producer, director, and actor, Til Schweiger (or Sgt. Hugo Stiglitz as you may know him) who often appears next to giant cans of beer of billboards throughout the country. 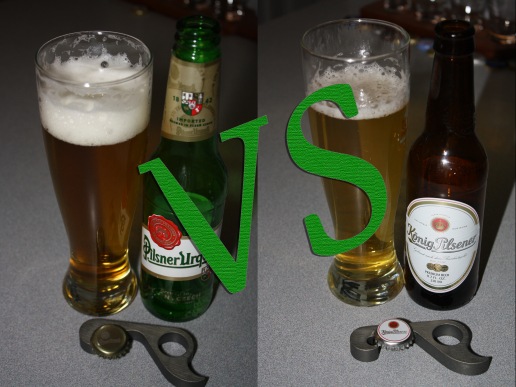 The two beers enter this match pretty evenly; both present well in-glass: straw yellow, earthy hop notes followed by a strong (if a bit sour) malty punch, airy pure white head that dissipates quickly. Each keeps pushing up and down the field, lots of complexity despite the simple formula, lots of hoppy progress both ways, but no real action. Everytime Urquell scores, König answers. This is going to be a close one, y’all.

Urquell loses the ball midfield due to a bit of over-carbonation and bite on the tongue. The turnover costs them dearly as König quickly capitalizes and finishes with practiced professionalism. Their well balanced team of flavors is just edging out the Urquell boys, who despite a great showing, can’t see to keep up with the nearly perfect grain-packed aftertaste.

And there goes the final whistle. A close, if somewhat uneventful match from these two classics. König 4. Urquell 3. 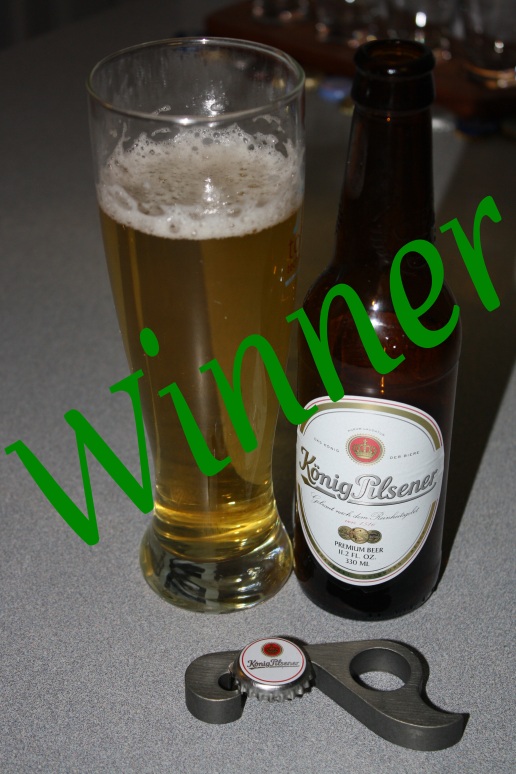 König Pilsener moves on to the quarters!

To buck tradition, I’m doing a linear bracket, where 1 faces 2, 3 faces 4, and so on. The full bracket looks something like (or exactly like) this:

Sam Adams Noble Pils (1) – Noble Pils started life as the Boston Beer Company’s Spring seasonal in 2010, but was promoted to a mainstay of the Sam Adams brand (meaning it is available year round) in 2012. It was replaced by the new Spring seasonal, Alpine Spring.

I’ve already reviewed this beer and it’s impressive. When properly chilled and poured, this is height of drinkability: a complex but refreshing hop bundle, crisp finish, very little bitterness, and flavor that could beat the hell out of a lot of ales. The hop-heavy bouquet is a little odd for a traditional pilsner, but the pale bohemian malt really helps balance out what might be an overwhelming aroma and taste from all five noble hot varieties.

EFES (2) – EFES Pilsener is the flagship of the EFES beer brand, the number one beer in Turkey, and the main sponsor of the Turkish basketball team, Anadolu Efes S.K.

I’d never had this beer until I started my search for a bunch of different pilsners. The name and simple label caught my eye initially, and its popularity in Eurasia made it seem like a worthy beer to add to the list. Similar to some large production American beers, EFES adds rice during the brewing process which is claimed to give it a “unique” flavor.

Noble Pils starts this match out strong, pouring a deep golden color with a fresh, pleasing aroma on top of a thick white head. EFES comes out onto the field weak and confused, like it wasn’t ready to play today. The grass and cereal aroma dissipates into the March air as quickly as the small white head, barely lasting long enough for photographers to get any action shots.

Sam Adams strikes first: hops pass the flavor onto malts who come running up from the back field to score crucial flavor points. EFES tries to counter, but just kind of sits there smelling like corn. Sam Adams scores again as EFES tries to build an attack with a taste that is oddly reminiscent of chewing on the wrapper of a day-old bran muffin.

This game is painful to watch. Noble Pils keeps rocking the goal posts and the EFES defense and keeper aren’t even looking in the right direction. This sort of match up makes you wish there was a mercy rule in beer-sports.

And that’s the game folks: Sam Adams Noble Pils – 45, EFES – 0. This is proof that a large number of sales in Turkey doesn’t necessarily mean quality.

Sam Adams Noble Pils moves on to the quarters!