This graphic bounced its way around Twitter like a drunken hummingbird yesterday, dragging behind it a whole cacophony of commentary about what the illustration implied about beer culture. Admittedly, my first reaction fell in the blast-zone of “defensive indignation” as I viewed the cover as a slight to anyone who had migrated from domestic macro to domestic craft, a bit of high brow mockery that screamed “unfair.” I ran around perpetuating that idea all day, hoping with an odd, maternal instinct, to protect the industry and people I’d grown to love from potential harm.

It took Matt LaFleur (the artist who designed and drew my blog logo) to point out that this illustration was the work of Peter de Sève, a long time cover-artist for the New Yorker. In my ignorance of all things good, I’d never heard of him until yesterday. I had no idea that this satirical, hyberbolized style was a defining element of his work, and that this cover is part of a bigger trend he has for creating butting narratives and social commentary about New York City in a single drawing. The problem here was not with the art itself, or de Sève’s intentions, but in my woefully inaccurate interpretation of his intentions.

There seemed to be just as many pro-fermentation people who considered this a positive cover; that if a publication as prestigious and established as the New Yorker would feature beer on its cover, it officially meant that craft beer had “made it.” I think you don’t need to look very far past the economic outlook of beer to see “made it” painted in rising black lines on sheets of green, but I get where they’re coming from.

My concern is that both gut reactions seem to miss the bigger point. I deeply respect illustrators partly because I don’t have a single atom of illustrative talent in my body, partly because of their ability to weave a complex narrative into their lines and colors, all within the confines of eight and a half by eleven. Peter de Sève isn’t just an artist who draws for the New Yorker who wanted to do a “beer cover” because it was trendy. He’s a storyteller, touching on how beer is evolving in his city, and in turn, the country.

It’s a tad incongruent that the story of rising appreciation for beer (and with it rising snobbery about beer) was sort of lost in the tribal division of whether it was “good” or “bad” as a message about the subculture, because said subculture is always clamoring for more stories that dig deeper, tell more, expose some truth. Well here is it! Right there on the cover of the New Yorker. A complete story about where craft beer stands today, in all its dual and polarizing glory. De Sève has managed to both give beer a boost up onto the saddle with wine by direct comparison of behavior, and give it a somewhat deserving sucker punch in its bearded, snobby jaw. It’s as well done a story about beer as I’ve read (or seen) in a long time, and I think that’s what we need to take away from this cover, not some selfish stance on what it means for beer people or the community.

The reality is that many outside the scene do see craft beer people as snobs; at best dismissive and close-minded about anything beyond their preference, at worst pedantic assholes who make sweeping judgments about whole groups of people based on something as metaphysically hollow as beer. I know, I know. It’s not all of us. It might not even be many of us. But it’s some of us, enough of us to have a “Tea Partiers on the Republicans” style effect of painting the whole group with one big, broad brush stroke of unfair social placement. And I’m here to remind everyone that there’s next to nothing any of us can do about it, other than not be snobs and scenesters ourselves in hopes that over time, public opinion will swing back to something more acceptingly benign. 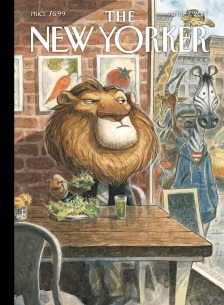 If you dig into de Sève’s other works, you’ll find that he’s a master of the social joke, at poking fun while also forcing some serious questions to the surface of the narrative. The health consciousness of this lion could be a jab at trendy vegan/vegetarianism, or a subtle nod that maybe all of us, even the career carnivores, should probably eat a little better. The beer cover does the same. Our foreground character is a black woman, subtly touching on both the lack of gender and racial diversity in beer. The server is a stereotype, but an apt one, one we all know very well from our local taproom on a Friday night. The drinker himself may be a microcosm of what the “beer guy” looks like from the outside of the beer world, a snapshot looking in, that we should all sort of look at and say, “huh, yea, maybe.”

So appreciate that de Sève has taken such an interest, and given us all this reflective opportunity. The accompanying story to this cover closes with, “It’s an unprecedentedly excellent time to drink beer in Brooklyn, as the cover suggests.” I don’t think the cover suggests that. I think it suggests a whole lot more.

For anyone interested, here’s some more of de Sève’s New Yorker covers (for storytelling reference):